Help us grow our collective voice by 500 new members this Winter Solstice: Join the tribe today! And invite all your friends too! 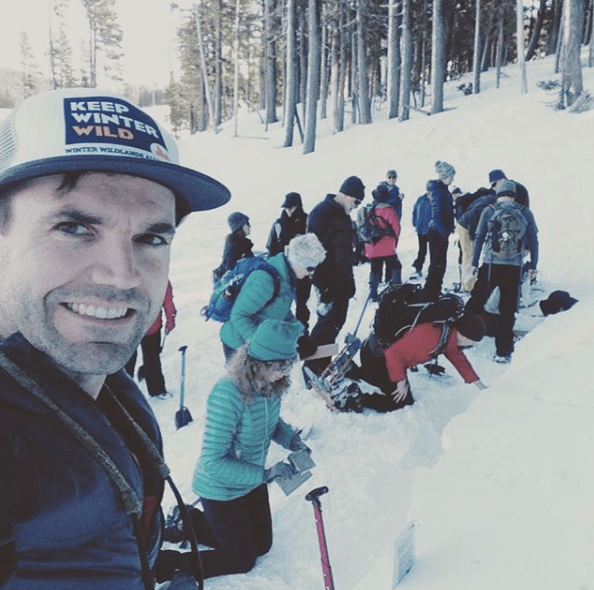 While its still technically the “pre-season”, many SnowSchool sites are working hard to train leaders for the coming winter.  This is especially true at sites that rely heavily on volunteer educators, such as Discover Your Forest in Bend OR.  This past week I headed over to Mt Bachelor (the site of DYF’s SnowSchool program) to provide a professional development workshop for 25 staff and volunteer educators.  And while many of the training sessions I provide each year tend to focus on experiential education for elementary students, this training focused on WWA’s unique middle/high school science curriculum. 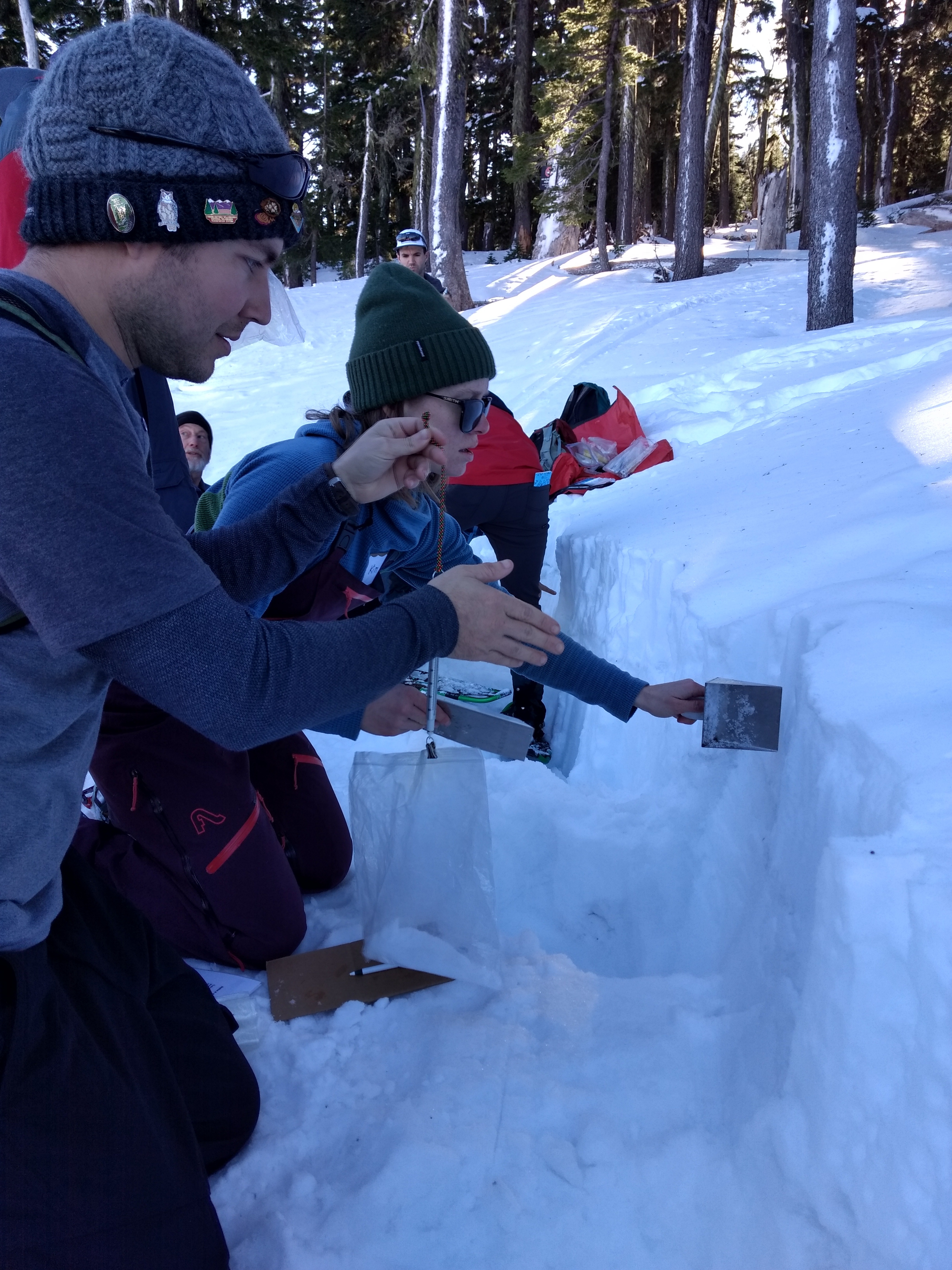 Of course, we all remember our high school snow science class, right? Yep, didn’t think so.  Even though mountain snow supplies up to 80% of the water in many communities in the western United States, it remains an understudied and overlooked topic. To fill this void we partnered with NASA snow scientists in 2014 to develop a unique curriculum especially for older students based on modern field techniques.  For example, participants in this program calculate snow/water equivalent (the water content of the snow) with density cutters and spring scales (left) and also examine snow crystal morphology with high powered macro-scopes (below). The result has created repeat SnowSchool experiences for middle and high school that builds on their same initial science adventure they completed as elementary school kids. 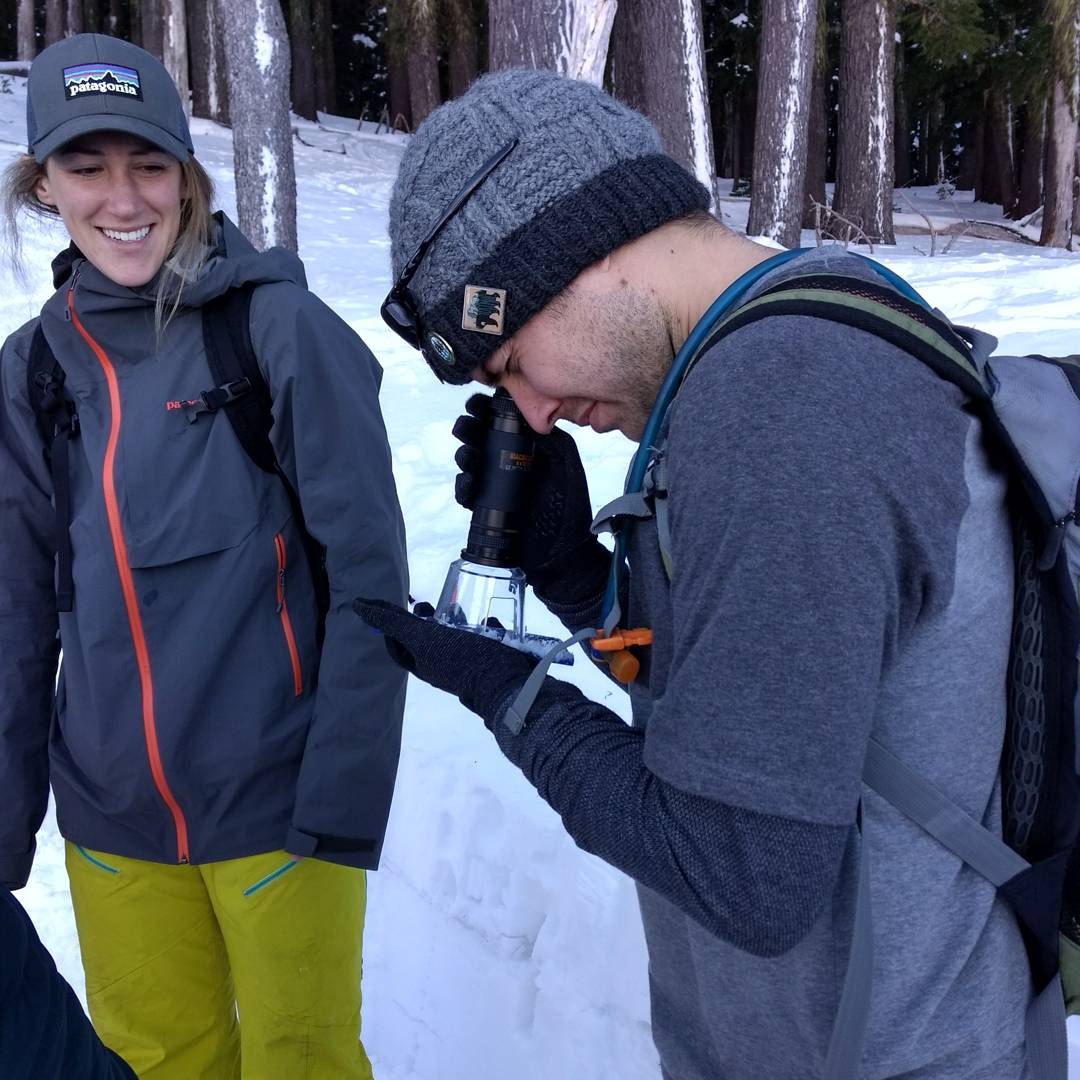 This programmatic addition is great fit at a SnowSchool site like Discover Your Forest, which annually engages over 2,000 elementary students from the Bend Oregon area.  Karen Gentry (DYF Education Director) and Bess Ballantine (DYF Education and Stewardship Coordinator) reached out to WWA to request support in developing this program to serve students in their community.  In addition to supplying the SnowSchool curriculum and activity guide, I was able to travel to Bend to provide a free training for the DYF volunteers and educators.  This included a classroom presentation on core concepts and a field day filled with hands-on science based on NASA field techniques!

At this point you may be asking, “Why is NASA involved in snow science?”   And the answer is pretty interesting… Snow science as a field has emerged relatively recently as questions about the Cryosphere (the snow and ice covered areas of the world) have become increasingly important over the past half-century.  Technology innovations have accelerated interest in improving the scientific community’s ability to estimate the water content of certain snow and ice covered areas (such as local watersheds and polar ice caps).  This is becoming increasingly relevant as climate change reduces polar ice and appears to be altering traditional local snowfall patterns.   To reduce our dependence on outdated historical snowpack data trends NASA is developing the capacity to estimate the water content of a snowpack using radar from aircraft (like a helicopter), and eventually from an orbiting satellite.  But accomplishing this goal requires scientists to first improve their knowledge of the snowpack itself.  In January 2014 at the Fraser Experimental Forest the NASA Snow Working Group held its’ first ever field workshop to improve scientists’ knowledge of snow.  Atmospheric scientists, physicists, geologists, engineers, statisticians (and one curriculum specialist!) all spent five days neck deep in the Colorado snow making careful hand tool measurements and gaining a greater appreciation of the complexities of a mountain snowpack.  This field course formed the foundation of the SnowSchool snow science curriculum for middle and high school students.

The purpose of the SnowSchool program has always been to give kids a rich hands-on learning experience that connects them with their local ecosystem.  Exploring their local winter wildlands on snowshoes is fun and helps kids build an emotional connection to the natural world.  By studying the same snow that will eventually supply their homes and communities with water in the spring and summer months, SnowSchool is helping kids create a personal connection with, and interest in, real science.

“Acoustic ecologist Gordon Hempton has spent the past 35 years recording natural soundscapes. His work has taken him around the world and into some of the least densely populated places. His hope is that we will fall back in love with planet Earth if we start listening. In lyrical short film Being Hear, filmmakers Palmer Morse and Matt Mikkelsen capture Hempton in his element as he shares the importance of preserving the silence. To experience the full range of nature’s orchestra, headphones are highly recommended.” — National Geographic Short Film Showcase

“For most of his life, Gordon Hempton has been in pursuit of nature’s myriad and multi-faceted soundscapes as an Emmy-winning acoustic ecologist. During that time, he has become a master of a skill that is inarguably a dying art: listening. In this short film, he shares insights on the constant and nuanced communications of nature, the alarming extinction of places unaffected by human activity, the way quiet can open our eyes to the larger picture and the benefits of simply paying attention to place. Silence, as he puts it, “is the think tank of the soul.” — Telluride Mountainfilm

The Beartooth Recreational Trails Association was the first Montana-based grassroots member of Winter Wildlands Alliance. They promote summer and winter trails in and around Red Lodge, MT, which includes operation of Red Lodge Nordic Center and grooming the West Fork (Forest Service) Road.

The West Fork, just 6 miles from town, offers something for everybody: walking, dog sledding, dog joring, snowshoeing, XC skiing (including track), skate skiing, and fat tire biking. Snowmobiling is also allowed, as there are privately owned cabins about 6 miles down the road. People also use snowmobiles on the road to access private cabins and the Absaroka-Beartooth Wilderness trailhead at the end of the road to ski and ice climb.

BRTA has had a permit to groom the West Fork road for several years, which benefits all users and keeps snow packed and fairly smooth into the spring. Their volunteer grooms 3-4 times a month; and this season they will have available for the first time a 4 stroke snowmobile pulling a modern Ginzu groomer for grooming fresh or old snow!

The Custer National Forest (now one half of the Custer-Gallatin) has not undertaken winter travel planning. This lack of planning means that the Forest Service does not have a definition nor any rules about tracked vehicles or what types of uses are allowed on the West Fork. This is problematic for BRTA’s grooming efforts and can cause conflicts. When tracked vehicles drive around the gate they can interfere with quiet recreation and destroy the grooming efforts. BRTA also encounters problems with horses on the snow pulling sleighs on runners, which also destroys the grooming efforts. 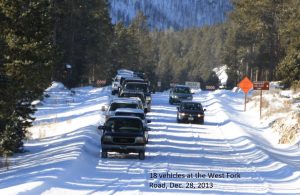 For many years BRTA has worked with the Forest Service to address the lack of signage, which is needed to govern all the users and reduce conflicts. They are also dealing with increased warm spells which deteriorate the snow. Other issues include a lack of parking; and this year, lack of a contractor to plow the 4 mile access road. Now they are working with private land owners, the Forest Service, and winter recreationists to raise money and come up with a plan to keep this access road plowed. The Custer Gallatin National Forest does not plow any Forest Service roads, but will plow parking lots.

Yesterday President Trump announced the largest-ever reduction in conservation protections for American public lands and now, with the end of 2017 in sight Congress is busy working to pass a budget and a tax bill, both of which threaten winter wildlands and public lands. Things are grim, but unfortunately becoming a snow cave dwelling hermit won’t solve anything and we’ve got to keep fighting.

The tax bill contains two provisions that are particularly worrisome for us as a non-profit that works to protect winter wildlands. First, the Senate bill would open the Arctic National Wildlife Refuge to oil and gas drilling. This provision was added to secure Alaska Senator Lisa Murkowski’s vote.

The tax bill also directly threatens non-profits – including those like Winter Wildlands Alliance who work to protect public lands and winter wildlands – by disincentivizing charitable giving. Charitable donations fund the majority of the work that we, and other non-profits, do. 80% of nonprofit funding annually comes from individual donors, and more than 90% of those individual donors make less than $100,000/yr. But under both the House and Senate bill the charitable deduction would only be available to the wealthiest Americans, meaning that 95% of Americans will be taxed on their charitable contributions. Likewise, the tax bill limits the estate tax by doubling the current exemption.

Click here to contact your Senators and Representative and tell them not to sacrifice the Arctic Refuge and to preserve incentives for all Americans to continue to contribute to non-profit organizations.

Congress is also working to finalize a budget for 2018. This has huge implications for public lands and winter wildlands – not only in determining how much money the public lands agencies will have in order to do their jobs in the coming year, but also because the bill is littered with bad riders, including, for example, a rider to exempt national forests in Alaska from complying with the Roadless Rule. If adopted, this would undo existing protections for about 15 million acres encompassing nearly one-quarter of all Forest Service inventoried roadless areas in the U.S. Many prime backcountry ski zones, like Turnagain Pass on the Chugach, are threatened by these riders. These riders would also set a precedent that would open the doors to even broader attacks on national forest roadless areas. We’re really worried about these riders.

If you live in  Alaska, California, Kentucky, Maryland, Montana, Mississippi, Missouri, New Mexico, North Dakota, Oregon, Rhode Island, Tennessee, West Virginia, or Vermont, you have a Senator who sits on the Interior Appropriations Committee. Your email to your Senator asking that he or she oppose Murkowski’s riders to Sections 508 and 509 of the appropriations bill is our best bet for defending the Roadless Rule.

Even if you don’t live in one of those key states it’s still worthwhile to send an email to your representatives in Congress to tell them the 2018 budget and its massive cuts to public lands agencies, scientific research, land conservation, and environmental protection is an affront to your values as a winter recreationist and conservationist.

If you want to see what else Congress is up to, please check out the Bill Tracker page on our website. We update this page frequently to keep you posted on current legislation.