We have arranged hotel discounts at the following downtown locations that are within walking distance of all Wild Weekend venues.

We also strongly encourage you to look into booking with AirBnB or VRBO as well as to coordinate through our Facebook attendee group* if you are interested in sharing/splitting a hotel room or getting a group to rent out a house for the weekend.

The Modern Hotel and Bar – www.themodernhotel.com

*We have a private Facebook group for attendees where you can discuss travel and accommodation options, ask questions about Wild Weekend, and have a space to communicate with other attendees. Registered and didn’t get a link to join? Email us: info@winterwildlands.org.

Conference participants should plan to arrive by the afternoon of Thursday, Oct 24 and depart any time Sunday, Oct 27 to fully experience Wild Weekend.

All of our events are in downtown Boise and the Boise Airport (BOI) is 4 miles (about 10-15 minutes) from the downtown center.

Ground transportation services for Boise Airport are located on the lower level roadway outside of the baggage claim area. Cross to the median and look for the color coded curbs. Uber and Lyft services are also available in Boise and pick-up at the passenger pick-up area on the lower level.

Valley Ride is the regional public transportation authority for Ada and Canyon counties with regular service to Boise Airport. Schedules and maps are located near the 1st Floor rotunda elevator. The cheapest way to get from the Boise Airport to downtown is the city bus, Valley Ride, line 3. Line 3 departs the Boise Airport approximately every 30 minutes and arrives at the Main Street Station. The journey takes about 14 minutes and operates Monday through Saturday.

If you are driving to Boise or renting a car for your stay, we suggest planning your parking availability ahead of time. Either at your hotel, AirBnB, or camping spot, make sure you know where your car can be parked at all times.

Parking is available throughout most of downtown Boise – either through metered parking you can pay for up to 4 hours depending on the location and with change or a credit card; free 2 hour parking in designated spots; and free all day/night parking in spots without a meter or signage. Parking rules and payment is enforced Monday – Saturday, 8 AM – 6 PM. All other times it is free.

The Grassroots Conference fee includes light breakfast and lunch for the two Conference days (Friday, Oct 25 and Saturday, Oct 26). Additionally, you will have access to discounts to various downtown Boise restaurants by showing your Conference badge.

Those with special diets or allergies should let us know ahead of time so we can best prepare the light breakfasts and lunches.

Complimentary coffee, tea and water will be available in the Owyhee conference room. No gum or outside food and beverage is allowed.

We will have alcoholic and non-alcoholic beverages available for purchase at our keynote, Backcountry Film Festival premiere, and SnowBall. SnowBall will also have a local food truck.

Since its construction more than 100 years ago in 1910, the historic Owyhee has played an important role in the Boise community, hosting famous politicians, musicians, and other prominent visitors at the Owyhee Plaza Hotel. The name was inspired by the blue ridges of the Owyhee Mountains and the blue river water of the Owyhee River.

Today, its grand glory preserved, enhanced with modern touches, the thoughtfully re-designed and restored Owyhee has been masterfully converted to feature 36 modern rental apartments, a revitalization of the banquet facilities, 60,000 beautiful square feet of modernized office and retail space, and the reopened rooftop terrace. The “new” Owyhee will surely be treasured and enjoyed as a beloved Boise icon for many years to come.

Boise boasts one of the world’s largest and most involved Basque communities. The Basque Center was built in 1949 and is a gathering place in the “Basque block” of downtown Boise with a museum, cultural center, restaurants and a market that holds a weekly community paella bake. The Center hosts several events throughout the year such as San Inazio in July, a typical Basque street festival; a Mortzilla Dinner every November where the community makes and eats traditional Basque blood sausage; and the Sheepherder’s Ball Dinner and Dance every December to help raise money for the Center’s Basque charity.

In the afternoon it’s not unusual to find some of the older Basques meeting there to drink coffee, converse, and maybe play some Mus.  There is a public bar with cheap drinks and the best bartenders in town.  The Basque Center also has a dance hall and commercial kitchen that is available to rent all year long.

The Egyptian Theatre is Boise’s premier historical theatre located in the heart of downtown Boise. The Theatre opened for business on April 19, 1927, as “Don Juan’s” and it became The Fox in the 1930s, the ADA in the 1940s, and The Egyptian in the late 1970s. It is the last  single screen theatre in downtown Boise to this day.

One of the most cherished historical landmarks, the venue offers a warm, lush and lovingly restored environment, with amazing attention to Egyptian architectural detailing. The acoustics in the room create a fantastic concert goer experience. The Egyptian has housed numerous top level national touring acts and theatre productions.

In 2016, the Idaho Coalition Against Sexual & Domestic Violence moved into the Linen Building with a vision to transform the commercial steam laundry building with a history of harmful, toxic working conditions for girls and women to a space that stands for what is possible when everyone is valued, safe, and can thrive. The Linen Building quickly became a home for activism and engagement by offering social justice leaders, communities, and organizations the space and support they need to spark social change. It’s an event space – and more. It can spark serendipitous interactions, build relationships, create networks, and grow sustainable solutions by bringing diverse organizations together as they work to build a better world; a world where we choose all of us. 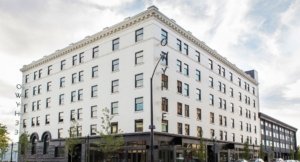 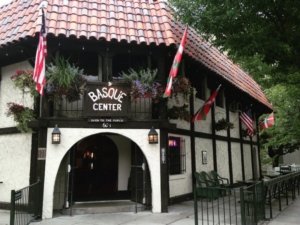 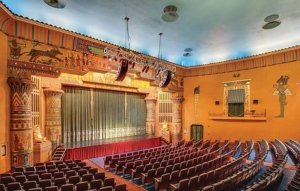 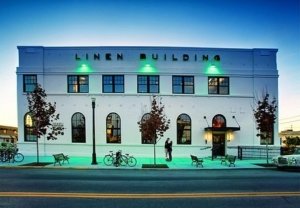