What Can We Learn from President-Elect Biden’s Cabinet Nominations

The President-Elect’s choice of nominees signals positive changes for public lands and the environment. 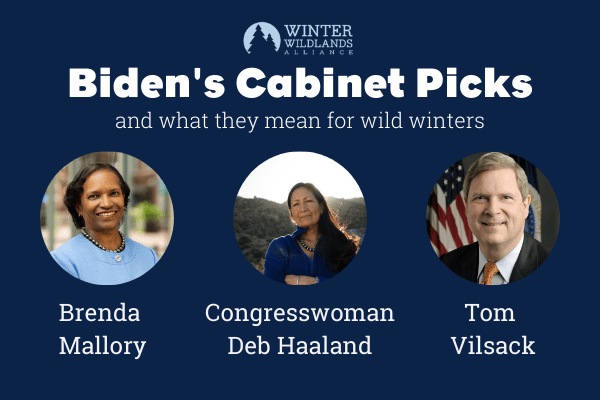 The Cabinet of the United States serves in the executive branch of the federal government. Members are appointed by the President and subject to confirmation by the Senate. Their role is to advise the President on topics such as education, energy, housing and urban development, and national security. In addition, and most important for public lands, Cabinet Members oversee all of the federal agencies – including the Forest Service, Park Service, and Bureau of Land Management.

President-elect Biden has promised to shift the nation away from climate-warming fossil fuels and toward renewable energy sources such as wind and solar. In our blog, “What We Expect from the Biden-Harris Administration,” we looked into our crystal snow globe to predict what impact the new administration will have on public lands. Most notably, we look forward to working with the new administration to restore NEPA and move public lands management away from the “energy dominance” agenda that has ruled for the past 4 years.

The most important Cabinet picks that will impact our work are the Secretaries of Agriculture and Interior. We’re also paying close attention to who will lead the Council on Environmental Quality (CEQ). The CEQ Chair is not a Cabinet position, but they do play a huge role in how government agencies implement the National Environmental Policy Act. Below, we dive into what the nominees for each of these positions, if confirmed, may mean for public lands and winter recreation.

2/23/2021: Tom Vilsack was confirmed as Secretary of Agriculture.

The 14 agencies within the U.S. Department of Agriculture (USDA) cover a broad mission ranging from food, nutrition, and (of course) agriculture to rural development and natural resources. One of these agencies, however, stands out in its importance for our work – the Forest Service. Given how much of what we do is focused on Forest Service lands and policy, we were keenly interested in who President-elect Biden would pick for this Cabinet position.

Tom Vilsack is a familiar – if not terribly exciting – face, having served as Secretary of Agriculture for all 8 years of the Obama administration. Under his leadership, we expect the Forest Service will place a renewed emphasis on planning. Both the 2015 Over-Snow Vehicle Rule, which guides winter travel management planning, and the 2012 Planning Rule, which guides forest plan revisions, were written under his leadership during the Obama administration.

Ramping up the pace and scale of these planning efforts would be welcome news, as most forests are operating under woefully outdated land management plans, and have not done any sort of comprehensive winter travel management planning. This planning is also critical to ensuring the Forest Service meets the Biden Administration’s major priorities – addressing climate change, racial equity, dealing with the covid-19 pandemic, and rebuilding the economy.

Winter Wildlands is optimistic about Tom Vilsack returning to his role as Secretary of Agriculture based on what it means for the Forest Service, forest planning, and winter travel management.

Update 3/15/2021: Deb Haaland was confirmed as Secretary of the Interior.

The Department of the Interior oversees more than 450 million acres of public land, including all our National Parks, BLM lands, and wildlife refuges – roughly one-fifth of all the land in the United States. The Interior Department also plays a huge role in energy development on public lands, which makes it a critical agency when it comes to addressing climate change. The BLM is responsible for overseeing all oil and gas leasing, coal mining, and renewable energy permitting and development on federal lands.

We’re excited about Biden’s nominee for Secretary of the Interior, Representative Deb Haaland, for a lot of different reasons. If confirmed, she will be the country’s first Native American Cabinet Secretary. As the head of the Department responsible for managing the majority of the nation’s public lands and the Bureau of Indian Affairs, it is fitting that she will be in charge of honoring US treaties with the Indigenous peoples from whom all lands were taken. Her nomination represents real change and a significant step towards achieving racial justice across the country.

Representative Haaland believes that “climate change is the challenge of our lifetime,” and as chair of a House Natural Resources subcommittee that oversees the Interior, she has led hearings on everything from the Trump administration’s handling of national park reopenings during the coronavirus pandemic to its treaty-obligated communications with tribal governments for projects that affect their lands. She is one of the original sponsors of the 30×30 resolution, calling on the US Government to conserve 30% of the nation’s lands and waters by 2030.

Winter Wildlands is excited about Deb Haaland’s potential for preserving the human-powered winter experience. With her experience and dedication to addressing the climate crisis, we know that protecting winter will be a foremost priority for the Department of Interior.

Update 4/14/2021: Brenda Mallory was confirmed as Chair of the White House CEQ.

Under the Trump administration, CEQ completed the most significant rollback of NEPA ever in the law’s history, forcing us to take the federal government to court to defend this landmark environmental law.

Brenda Mallory, President-elect Biden’s pick to lead CEQ, is currently the Director of Regulatory Policy at the Southern Environmental Law Center and a true “NEPA nerd” (a title our Policy Director, Hilary, proudly wears as well).

Mallory has worked extensively to protect and defend NEPA throughout her career and is exactly the person we need to oversee the effort to restore this law by replacing the terrible 2020 NEPA regulations enacted by the Trump Administration’s CEQ.

Winter Wildlands couldn’t be more excited to see Brenda Mallory take the helm at CEQ and we look forward to working closely with Mallory to protect wild winters.