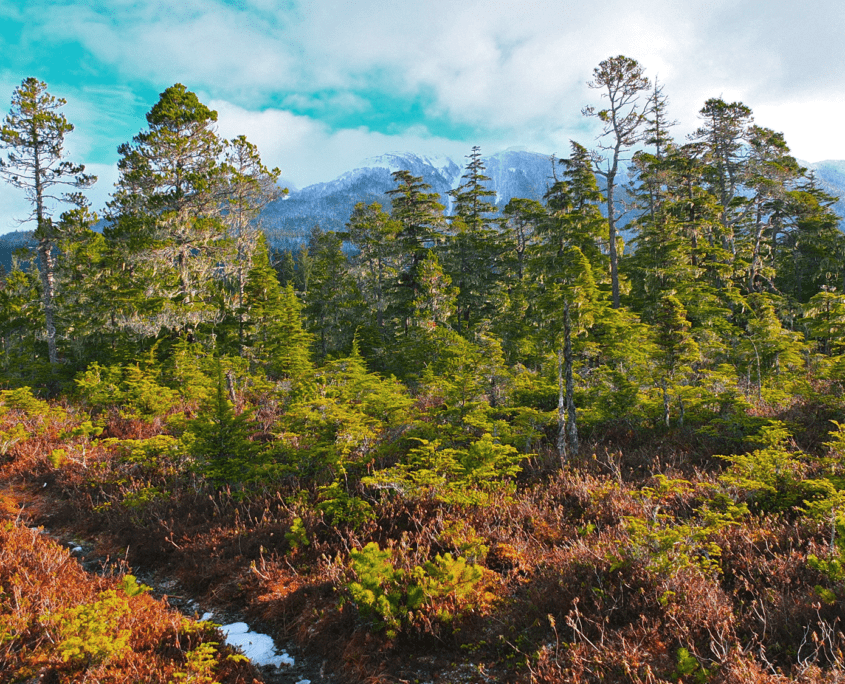 The Trump Administration proposes to allow logging on the Tongass National Forest and exempt it from the Roadless Rule, stripping protections from old growth forests that are vital to the fight against climate change.

One of the world’s largest carbon sinks is under siege by the Trump administration. On Tuesday, the U.S. Forest Service proposed to allow logging on 9.3 million acres of Alaska’s Tongass National Forest, which is the largest intact temperate rainforest in North America and one of our nation’s greatest natural treasures. The move would exempt the Tongass from the Roadless Rule and reverse nearly two decades of conservation that protects a critical ecosystem in the fight against climate change.

The Tongass is the country’s single most important national forest for carbon sequestration and carbon change mitigation. The U.S. Forest Service estimates the Tongass stores 10 to 12 percent of the total carbon captured by America’s national forests. Many of the trees in the Tongass are over 800 years old, standing over 200 feet tall and 12 feet in diameter.

A recent IPCC report inventories the impacts of climate change on the planet’s last remaining winter ecosystems: glaciers are melting, coastlines are eroding, and permafrost is disappearing. Alaska is warming at roughly twice the rate compared to the rest of the country, which is causing a profound impact on communities, livelihoods, and ecosystems across the state. Protecting the Tongass is critical to fighting climate change and saving winter.

“Cutting old growth trees on the Tongass has an effect on powder skiing in the Wasatchand elsewhere in the lower 48,” says Hilary Eisen, Winter Wildlands Alliance policy director. “Our snow seasons are getting shorter. We’re getting more rain instead of snow. And not only are we failing to address climate change, but this action actually takes us backwards. It undos 18 years of pro-active conservation work that protected these critical carbon sinks.”

The U.S. Forest Service will publish a draft Environmental Impact Statement to exempt the Tongass National Forest from the Roadless Rule this week. The agency is recommending an alternative that strips longstanding protections against logging and road-building that have been in place since the Roadless Rule was enacted in 2001.

The Washington Post reports that the Trump administration wants to reverse long-standing protections against logging at the “request of Alaska’s top elected officials” who say timber production will boost the local economy. However, the timber industry provides just under one percent of southeastern Alaskan jobs, compared to seafood processing’s 8 percent and tourism’s 17 percent. Logging the Tongass will have a devastating impact to both Alaska’s salmon fishing and tourism.

The Tongass is home to a wealth of wildlife—including whales, bald eagles, otters, beavers, wolves, and bears. There are five species of salmon in Tongass rivers. According to the Outdoor Industry Association, Alaska’s recreation industry supports more than 70,000 jobs in the state, generating more than $2 billion in wages and salaries. The Outdoor Industry also contributes $7.3 billion to Alaska’s economy. Rivers and forests on the Tongass provide ample opportunities for paddling, climbing, mountaineering, backcountry snowsports, mountain biking, and hiking.

Winter Wildlands Alliance and our partners at the Outdoor Alliance strongly oppose exemptions or exceptions to the Roadless Rule in Alaska—and elsewhere. The Roadless Rule preserves wild landscapes across our National Forest system and provides opportunities for recreation and adventure. It’s also a fundamental tool to conserve sensitive ecosystems and wildlife habitats. The public will have 60 days to provide comment on the Forest Service’s plan to rollback regulations on the Tongass. We will keep you informed as soon as the draft EIS is published and available to the public.