We continue to find unique human-powered winter stories to share on screen for the past seventeen winters, including this season’s “Finding Gulo” by Wild Confluence Media and The Wilder Studio. 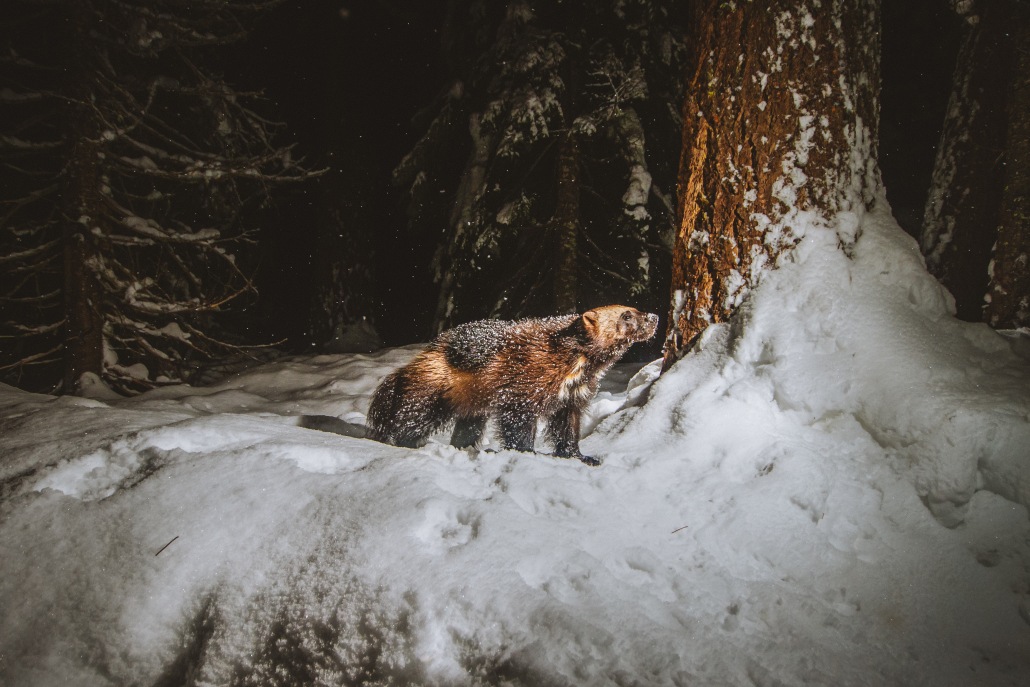 Photo by David Moskowitz (On the ancestral lands of the Coast Salish, Stillaguamish, Duwamish, Muckleshoot, Suquamish, and other Nations)

Each fall, we spend weeks watching films to find stories of human-powered winter adventure and advocacy we think will fit in the upcoming Backcountry Film Festival season. While our Festival theme drives us, we are challenged each season to find a quality set of films based in the snowy human-powered element of it all.

How do you tie together urgent yet complicated issues like mountain biodiversity, the future of snow, rural economics, human-powered backcountry adventure, local connection to the natural world, and conserving wildlife all in one Festival program, let alone one film? In this season’s line-up, one film answered that question by telling a story about wolverines and backcountry skiing.

The wolverine (Gulo gulo) is an intrepid and solitary carnivore, historically ranging throughout North America’s most rugged and remote regions. However, fur trapping and development by humans decimated their populations and habitat – so much so it seemed that wolverines might disappear from much of their wild homes forever. Today, they are recovering in the contiguous U.S. and sightings of the elusive gulo are becoming more frequent among backcountry skiers who visit the West’s most remote mountain ranges.

“Finding Gulo” tells the story of Steph Williams, a ski guide and field biologist, as she works with wildlife photographer Dave Moskowitz to capture images and data of a recovering population of wolverines near her home in the North Cascades of Washington. Steph is on a mission to prove that citizen science can be a critical tool to protect endangered wildlife.

Steph, a backcountry skier and guide, has long been concerned about the impacts of climate change and as her connection deepens with wolverines, so does her commitment to grassroots stewardship. Her organization, Cascades Wolverine Project (CWP), supports wolverine recovery in the North Cascades through field science, visual storytelling, and community science. Supported by Patagonia and Conservation Northwest, CWP teamed up with filmmakers Colin Arisman (Wild Confluence Media) and Tyler Wilkinson-Ray (The Wilder Studio) to create “Finding Gulo” in 2021.

The wolverine is hard to study (and film). They individually range for hundreds of miles across the most remote and technical terrain in the Northwest, making them difficult to track. A species that is exceptionally clever and good at avoiding live traps, they have been overlooked and underappreciated in most of the scientific world.

Grounded in the impossible, the film finds success in the first images of wolverines that season – and the first genetic information collected from a hair snag in the entirety of CWP’s history. The skiing scientists celebrate on camera and we, the viewers, find ourselves celebrating alongside them.

For something so elusive and wild, it’s clear why we all feel very connected to “the spirit animal of the backcountry,” as Steph endearingly refers to the gulo. We all seek the same elusive wildness during our days in the skin track and the wolverine reminds us of the rough and simple solitude the backcountry holds.

The outdoor community that shares the wolverine’s habitat has a vital role to play in its recovery. Steph says, “The people most likely to encounter wolverines are the backcountry skiers who get deep and high and far.” By reporting wolverine encounters on the Project’s website, citizen scientists can add a lot of important data of rare wildlife tracks and sightings. It’s important to know what type of wildlife habitat you may be encountering and to recognize your responsibility to be a steward of the land in and out of the skin track.

The connection between citizen science and citizen filmmaking in the outdoors is becoming more obvious in the work we do and messages we share: we are the stewards of our winter wildlands and we are the ones telling our stories from the backcountry. At the Backcountry Film Festival, we manifest the power of humans and their spirit through wild conversations and action across the snow belt. Creating a program of films that inspire these moments and helps protect our winter wildlands is a badge of honor we wear proudly.

Just like the wolverine, we know a film like “Finding Gulo” is hard to find. So, we reduce the barriers by making submissions free and open year-round. This year, we also launched a film grant with Sierra Nevada that will award $7,500 to films telling snowy human-powered stories we love so much.

Take Action to save wolverines by supporting the Recovering America’s Wildlife Act: https://actnow.io/bws56qQ.