The National Environmental Policy Act (NEPA) is about to become a rubber stamp for bad ideas. We’ve got one last chance.

Welcome to the Stash! This is a monthly email produced by Winter Wildlands Alliance to connect the winter community with stories about environmental policy, grassroots advocacy, and backcountry skiing. Our goal is to help you understand what’s happening in the mountains, meet the people and organizations shaping the environment, and find inspiration to get out there and make some turns. 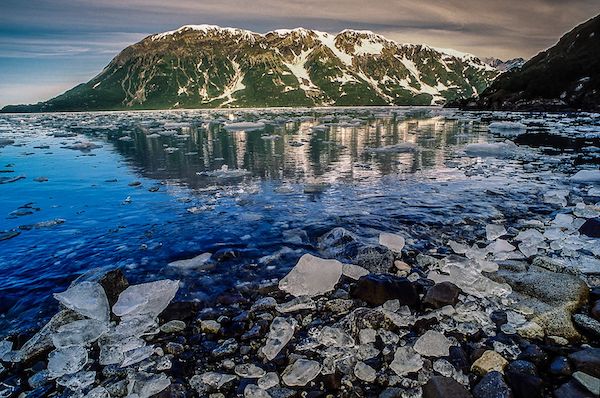 The Tongass and the Roadless Rule Need You to Speak Up

The U.S. Forest Service has proposed exempting the Tongass National Forest from the Roadless Rule, stripping protections and exposing this one-of-a-kind landscape to resource extraction. The deadline for public comment is December 17.

To skiers, Alaska is a land of fluted spines and magic snow that sticks to near-vertical walls. A devoted community of backcountry skiers hike to the top of those beautiful, massive, high alpine peaks. But before you get to the top, before you even get to a ramp to gain some elevation, you often have to hike through dense, moss-covered forests. Beneath the frozen peaks, Alaska is brimming with forests and wildlife that need your help.

At 17 million acres, the Tongass is the largest national forest in the United States and the largest intact temperate rainforest in the world. It is home to whales, salmon, bears, bald eagles, and old growth forests that have stood on this planet for hundreds of years. The Tongass also holds tremendous value for carbon sequestration and climate change mitigation. The U.S. Forest Service estimates the Tongass stores 10 to 12 percent of the total carbon captured by America’s national forests.

Right now, the U.S. Forest Service has proposed exempting the Tongass National Forest from the Roadless Rule, a move that would strip protections and expose this wild, one-of-a-kind landscape to build new roads that enable resource extraction, like logging and mining. This will release thousands of tons of methane, carbon dioxide, and other greenhouse gases into the atmosphere, transforming the Tongass from a significant carbon sink into a carbon source.

For reasons of conservation, recreation, and, most importantly to winter, climate action, we must fight for the Roadless Rule’s integrity in the Tongass—and all over the United States. Alaska isn’t the only state currently seeking exemption from the Roadless Rule; Utah is, too.

Cutting old growth trees on the Tongass will have a dire effect on winter. Climate change is melting glaciers and causing permafrost to disappear. Winters are getting shorter and warmer, with more rain falling instead of snow. Alaska is experiencing these warming trends at a faster rate than the rest of the United States—just look to backcountry ski forums to see the ways skiers are trying to navigate melting glaciers and changing routes. The Tongass, with its old growth forest, is something that should be preserved, so it can continue absorbing carbon from the atmosphere. Not only does the Forest Service’s proposed exemption from the Roadless Rule fail to address climate change, it’s actually taking us backwards.

Here’s something you can do: Ask the Forest Service to keep the Roadless Rule on the Tongass National Forest by choosing the “no action alternative.” Comments are due by December 17—that’s a week from today. 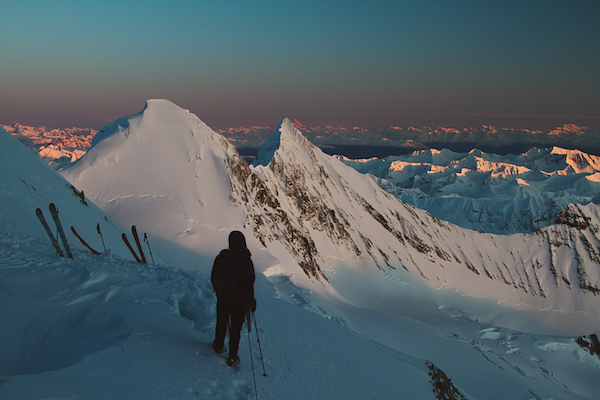 This Holiday Season, Consider a Gift to Winter

At Winter Wildlands Alliance, our mission is to protect and preserve winter landscapes as they are: raw, vast, quiet. We represent human-powered snowsports on America’s public lands. Your gift will support environmental policies that promote stewardship and conservation, advocacy for wilderness and non-motorized experiences, an educational program that gets introduces thousands of kids to snow, and a film festival that raises money for grassroots causes.

Patagonia is matching donations made to grassroots groups on Action Works—including us! 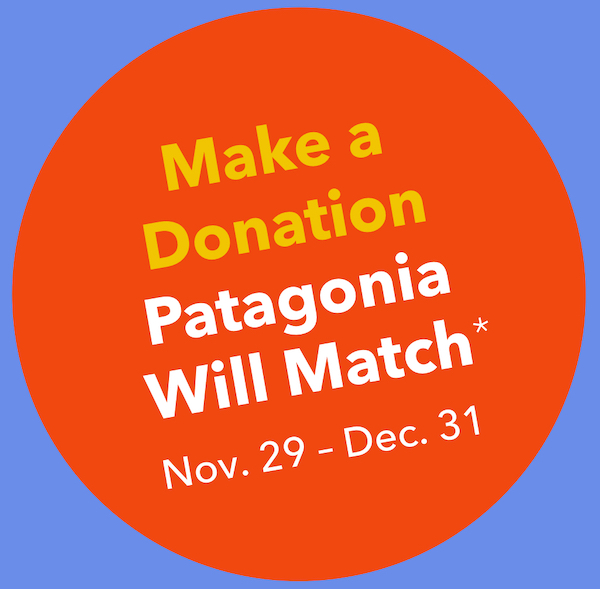 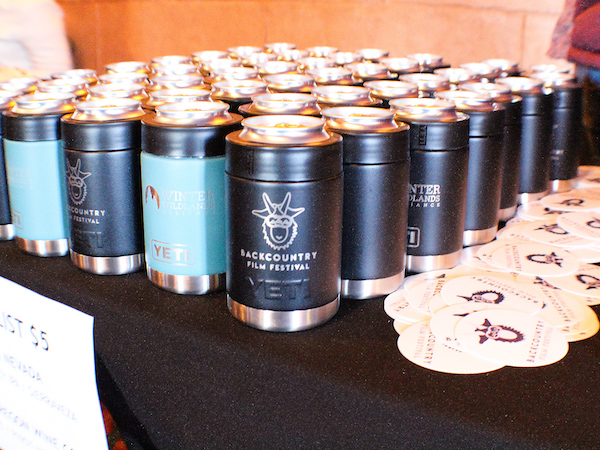 The Backcountry Film Festival Is On the Road

California, Washington, Idaho, Alaska, Colorado—we’re headed your way this month. Check the events calendar to find out when the Backcountry Film Festival is coming to your town. 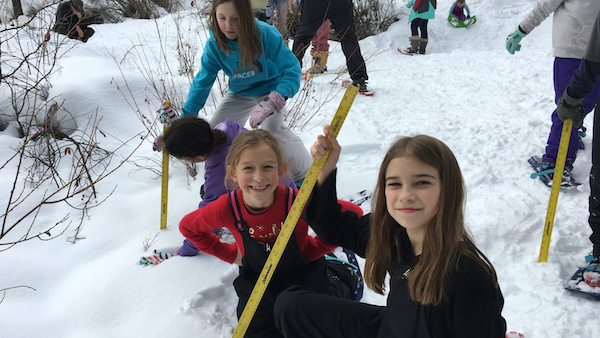 Last month, SnowSchool Director Kerry McClay went to Nederland, Colorado, to meet with a team of snow scientists, SnowSchool educators, and volunteers for a workshop on citizen science and NASA’s SnowEx mission. The ultimate goal of the SnowEx mission is to launch a satellite that will measure the amount of snow—and the water in that snow—on our planet at any given time. For the winter of 2020, NASA will be flying aircraft over Colorado, California, Utah, and Idaho to test out new instruments that scan the snowpack. As scientists conduct these tests, NASA needs people on the ground—citizen scientists—to hand-collect data from the snowpack that can be used to verify their results.

The Wilderness Society explains why the Roadless Rule matters to outdoor recreationists.

Hunters and anglers have, for decades, paid excise taxes at the point of purchase when they buy pretty much any piece of equipment or gear used in their outdoor activities. Those taxes go to conservation programs, wildlife protection, habitat restoration, and some trail maintenance. But what about the rest of the backcountry users? Should there be a “backpack tax”? Adventure Journal discusses.

Advocacy Director David Page penned a feature for Powder Magazine about an old wilderness lodge in Canada’s remote North Cascades that has finally opened to skiers. “We were seven dudes—six Canadians and myself—the only human beings in 130 square miles of uninterrupted government-protected, non-motorized wilderness,” writes Page.

As the 2020 winter approaches, educators and snow scientists in California, Idaho and Utah are gearing up for a unique SnowSchool project.  This year as SnowSchool students romp through fresh powder on snowshoes (big shout-out to our friends at MSR for providing new snowshoes to many of our SnowSchool sites this year) and participate in fun experiential activities, they also have a special opportunity to collect snowpack measurements and send their findings to NASA scientists.  Thanks to a new partnership with the National Aeronautics and Space Administration’s SnowEx program,  SnowSchool is excited to add a citizen science element that will allow students to play a role in helping scientists do the important work of measuring and monitoring mountain snowpack!  The goals of the project are to get students excited about being outside in the winter, help them learn more about the field of snow science, and make real contributions to ongoing research.  This creates a new opportunity for SnowSchool sites in these areas to blend traditional SnowSchool activities with new NASA SnowEx citizen science activities to measure snowpack depth and density (water content). 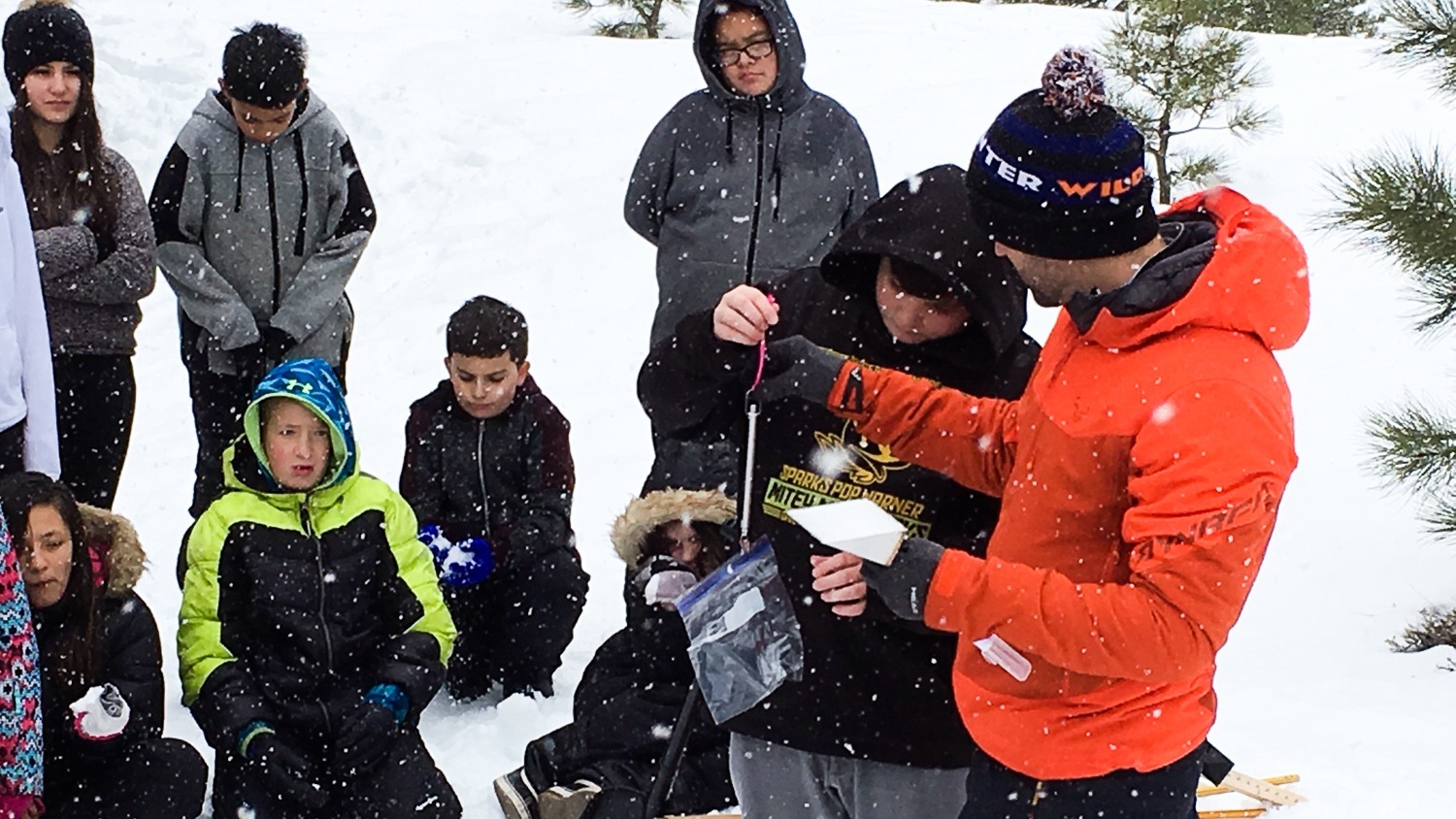 The ultimate goal of the SnowEx mission is to, one day, launch a satellite that will measure the amount of snow (and water in that snow) on our planet at any given time. During 2020 NASA will be flying aircraft across portions Colorado, California, Utah and Idaho to test out new instruments utilizing LIDAR, or Light Detection and Ranging, to scan the snowpack.  As scientists conduct tests with their instruments, NASA needs people on the ground—citizen scientists—to hand-collect data from the snowpack that can be used to verify the SnowEx results. Those citizen scientists are SnowSchool students!  Any SnowSchool site, school or student in the SnowEx flight path can participate (see map bel0w).  Orange and blue boxes on the map below show the SnowEx flight paths.  Orange indicates the top priority zones.

Fifty to 80 percent of the water that we use in the West comes from the seasonal snowpack. One out of six people in the world rely on the snowpack and glaciers for their water resources. Snow is fundamental to winter recreation, which generates $20.3 billion in the U.S. economy. The snowpack also reflects up to 80 percent of the sun’s energy, which is a vital process to regulate global temperatures.  These statistics help illustrate why scientists and hydrologists need to measure the snowpack and how much water it holds. 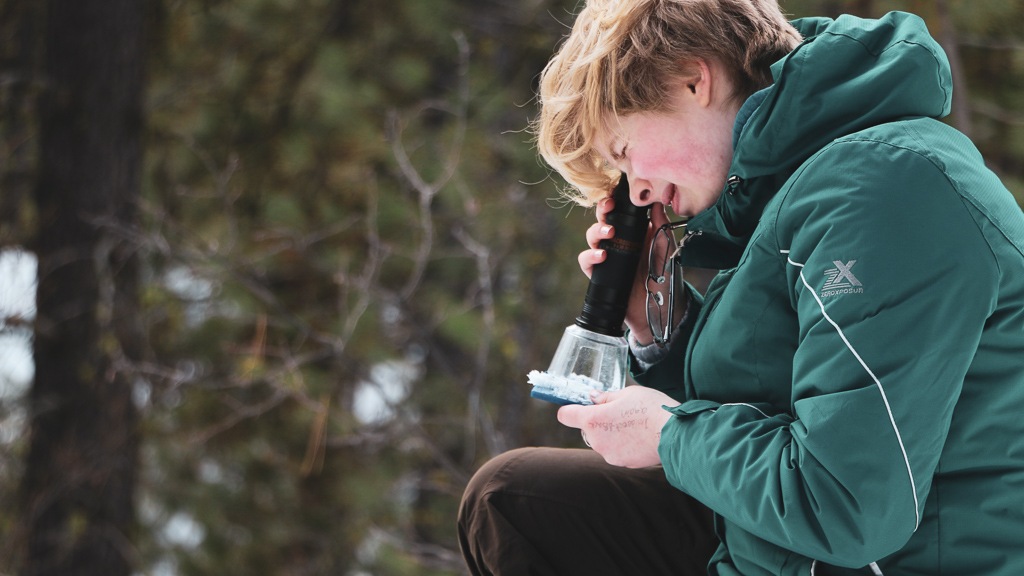 SnowSchool has long been a bridge to connect students with the outdoors and the fascinating world of snow science! Want to get involved in this year’s NASA SnowEx project? Here’s how-