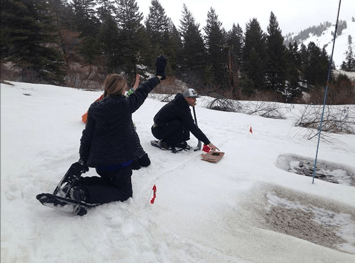 Snow scientists seem to generally agree that the global snowpack is melting, on average, a few weeks earlier due to climate change.  This trend carries many implications for water in the Western U.S. where 70-80% of our annual supply comes from mountain snow.  Adding to the concern is a sprinkling of recent studies published in scientific journals (and summarized in mainstream media) that detail how an increase in dust is accelerating snowpack melt in mountainous areas. Blowing dust from farmlands and a variety of other sources in the West is becoming increasingly abundant in a warmer, dryer climate.  And while studying dust particles on the surface of mountain snow might sound obscure at first, the impacts are so profound that some snow scientists are now suggesting that dust may be a more significant driver of accelerated snowpack melt than air temperature (read that last statement once more if you need to).

At SnowSchool 33,000 students annually learn about the science of snow not by reading peer reviewed journal articles, but through outdoor experiential activities.  Over the years, to keep our curriculum cutting-edge, we’ve partnered with some of the nation’s leading snow scientists.  So to create a hands-on activity to help K-12 students explore the phenomenon of dust-on-snow, WWA collaborated with The University of Colorado’s Dr. Alexandra Rose, Education and Outreach Coordinator at the Niwot Ridge Long-Term Ecological Research Site.  As a unique SnowSchool site in WWA’s national network, Niwot Ridge LTER engages local students but also provides a special opportunity to integrate new snow science into the national SnowSchool program curriculum.  To better understand the impacts of dust on snow  Niwot Ridge scientist Cliff Bueno de Mesquita designed an experiment using black sand spread over the surface of the snow.  The black sand significantly reduces the snow’s albedo (reflectiveness) and, depending on weather, melts the snowpack potentially weeks early. This provides scientists with a unique opportunity to study the effects of dust and climate change on high mountain ecosystems.  When modified for K-12 students this experiment also makes for an ideal SnowSchool activity with the potential to provoke rich science-based discussions among student participants.

Using the Niwot Ridge experiment as a model we piloted an experiment for 5th grade students using three plots (see right) of sand, duff and snow (control).  Working with Bogus Basin SnowSchool educators Ilyse Sakamoto and Josh Kissel, we brought groups of Boise-area 5th graders to the survey site in April (about a week after the plots were created).  As part of their SnowSchool field trip in the Boise National Forest the students made observations about the plots, noted the obvious difference between the darker plot, the lighter plot and the snow-only plot, discussed the water supply implications and even created their own dust covered plots!  Their keen observations and the rich discussions that followed suggested that this experiment was worth sharing nationally.  Thus a write-up of this activity and corresponding K-12 curriculum connections will be circulated this spring to educators at WWA’s 65 SnowSchool sites.  Interested in seeing the full write-up? Contact kmcclay@winterwildlands.org

WWA envisions the SnowSchool program as bridge between the snow science community and K-12 students.  Similar projects in collaboration with other Niwot Ridge LTER scientists are planned for the upcoming spring and summer.  Stay tuned for future updates! 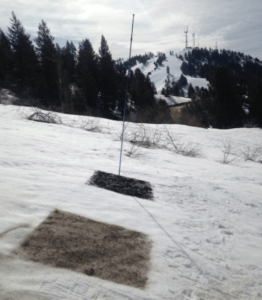 Day 1: To help students explore the effect of dust on snow we created plots using natural sand and duff found in the area. 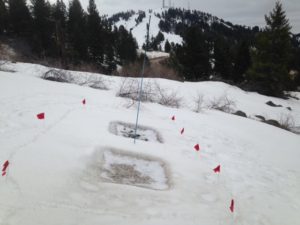 Day 7: Even with consistently overcast skies and some new snow, signficant changes were readily observable after just one week.  The scientific explanation here is that pure snow reflects the majority of the sun’s energy.  However, when coated in dust, the snowpack’s albedo (reflectiveness) drastically declines and begins absorbing more of the sun’s energy (causing it to melt). 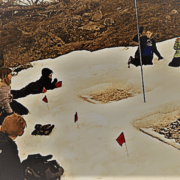 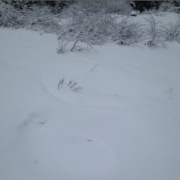 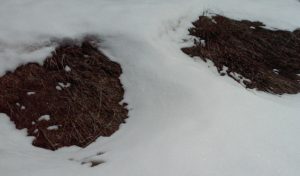 Day 21:  Despite all the new snow just the week prior, the dust and duff plots were completely melted after three weeks.  Dramatic results from such a simple experiment…  Photo credit Ilyse Sakamoto