BACKGROUND: Public comments closed August 6, 2018 on the Eldorado National Forest’s Draft Environmental Impact Statement (DEIS) for Over-Snow Vehicle (OSV) management on June 22, 2018. Especially compared with what we saw in the Tahoe Draft OSV Plan, we were disappointed with the level of analysis performed by the forest and with the limited range of alternatives being considered. The forest failed to seriously consider and analyze any significant further restrictions on OSV use and is actually proposing to open many popular and historic cross-country and backcountry ski zones to motorized use.

Only Alternative 3 presents a clear-eyed vision for winter travel management that recognizes historically non-motorized areas, focuses OSV designations in areas where OSV use actually occurs, and acknowledges that not all parts of the forest receive sufficient snow for OSV recreation. SEE BELOW FOR WINTER WILDLANDS ALLIANCE COMMENT LETTER. 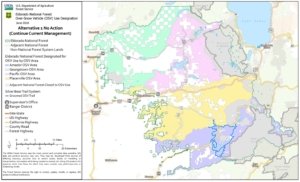 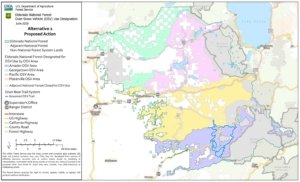 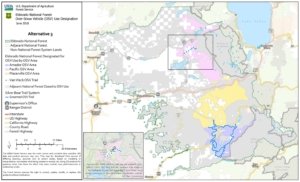 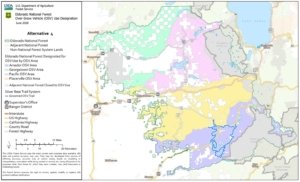 There are significant problems with the Eldorado’s Draft Plan that violate both the National Environmental Policy Act (NEPA) and the 2015 Travel Rule:

1) The majority of Alternatives, including the Proposed Action, make no attempt to minimize conflict with other uses or protect backcountry skiing opportunities

NEPA regulations require that the Forest Service, in designating areas and routes open to OSV use must “minimize conflicts among the various uses of National Forest System lands.” The Proposed Action designates as open to OSV use areas that are important to non-motorized users such as Van Vleck Meadow, terrain south of Highway 50 at Echo Summit, areas north and south of Highway 88 at Carson Pass, Martin Meadow at Carson Spur, and Anderson Ridge just north of Highway 88. These are all popular and longstanding locations for cross-country skiers and snowshoers. Alternative 4 is even worse – it would allow OSV use in the Loon Lake winter recreation area as well as all of the areas listed above, and many existing non-motorized areas on the forest. By designating these areas for OSV use, Eldorado has completely ignored their responsibility to minimize conflicts between snowmobilers and non-motorized users. Alternative 3 is the only Alternative that protects backcountry skiing opportunities on the Eldorado National Forest.

2) The DEIS does not consider a full range of alternatives

The DEIS divides the forest into four partitions using ranger district boundaries and designates a single OSV area within each partition that is “smaller than a ranger district.” However, since the “open areas” are adjacent to each other and snowmobiles can freely travel across these arbitray boundary lines without even knowing they are doing so, in reality there is a single, large open area that constitutes 75% of the forest. This is violation of the Travel Rule, which states that open areas must be “discrete, specifically delineated spaces that are smaller … than a ranger district.”

These proposed alternatives do not meet the basic legal requirement established by the 2015 OSV Rule to manage the forest as “closed [to over-snow vehicles] unless designated open.” This same flawed approach by the Lassen National Forest in 2016 led to multiple official objections which forced the Lassen to go back to the drawing board to develop a new Alternative and re-work its Environmental Impact Statement. We are disappointed to see the Eldorado repeating the Lassen’s early mistake. 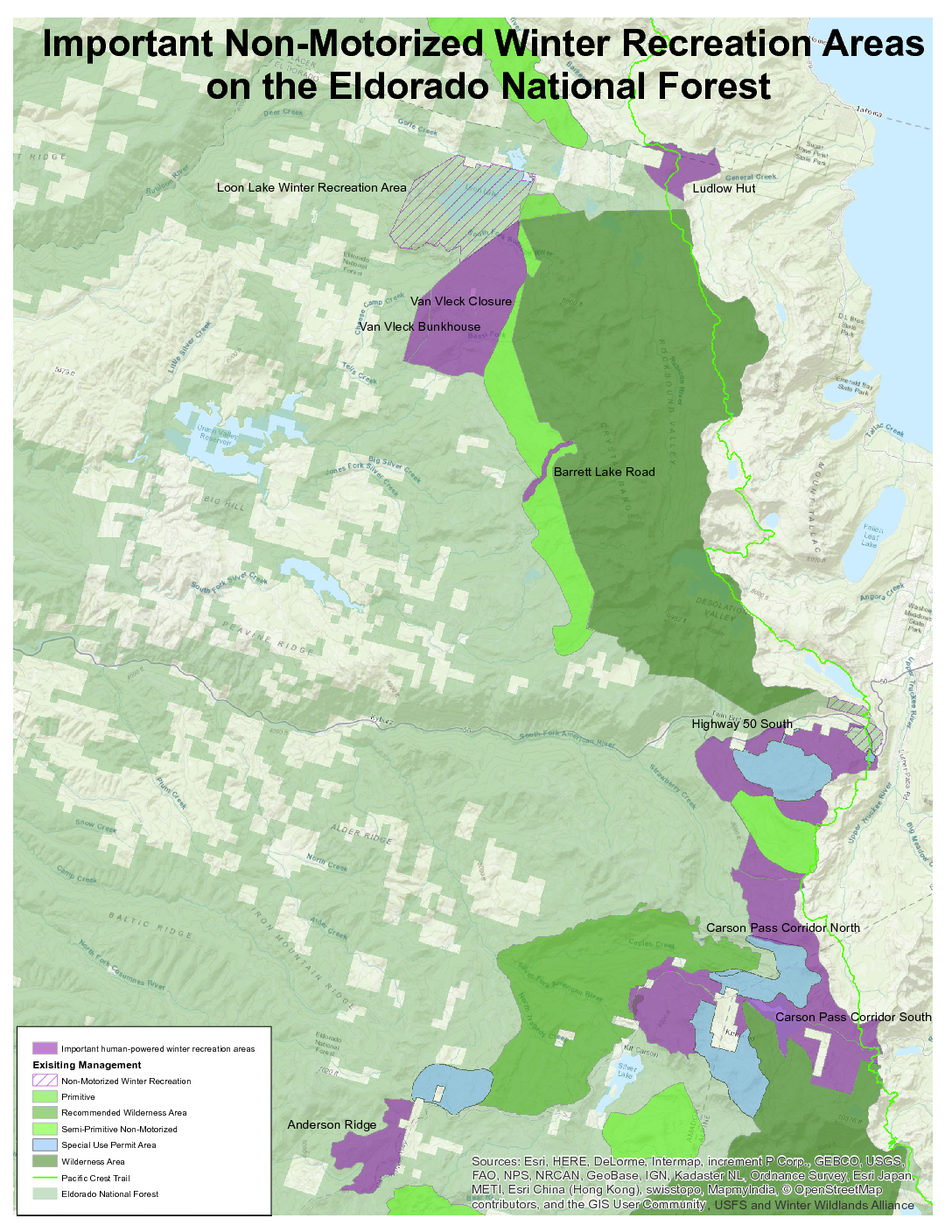 Based on a public scoping process that ended in April 2015, the Eldorado National Forest has been working on developing and analyzing a series of draft winter travel management alternatives. During the scoping period, Winter Wildlands Alliance and Snowlands Network submitted a “Skiers Alternative” for the Eldorado National Forest. You can view a map of our proposal here.

From the DEIS: “The Forest Service received and considered responses from 103 interested groups, individuals, and agencies in the form of letters, emails, and website submissions. Comments received expressed support, opposition, or concerns with the proposed action, or requests for revision and new alternatives. Letters dated April 20, 2015 , were received from the Plaintiffs describing their preferred alternatives. The Intervenors sent a letter describing their alternative on April 16, 2015. Follow – up letters were sent to both the Plaintiff and Intervenor groups on October 22, 2015 , requesting clarification of the alternative components that had been submitted and informing them of the components of their requests that were believed to be outside of the scope of this project. The Forest Service received clarifying letters of response from the Plaintiffs and Intervenors dated November 5 and 16, 2015, respectively.”

For more on the Eldorado’s scoping, proposed action and analysis, visit the Forest Service Project Page (click on “Analysis” tab).