Winter in central Idaho was a bit slow to arrive this year.  A strong La Nina pattern sent its polar jet stream with cold temperatures and precipitation in abundance to Montana and Idaho’s Panhandle.  Meanwhile, the mountains to the south waited in earnest.  At WWA’s National Flagship SnowSchool Site (Bogus Basin) curriculum workshops planned for volunteer leaders in January happened as planned, but had to be modified to accommodate the low-snow conditions.  And this year the annual construction of the SnowSchool Igloo happened with the help of staff, volunteers and the rarely used igloo-block-maker.  Traditionally this igloo has been built in deep snowpack conditions using snow saws to cut large snow blocks.  But with a thin snowpack the block-maker allowed the construction crew to scrape-up skiffs of snow and fill the box to create the needed blocks.  And the resulting igloo was a thing of beauty!

When the the first day of SnowSchool for students finally arrived in early January it was accompanied with a mere 15 inches of total snow on the ground and sheets of rain falling from the sky!  And how did the 5th grade SnowSchool students fair that day you ask?  The student quote of the day says it all- “This was the best field trip ever!” That’s right, the less-than-wintry conditions did nothing to slow the students’ snowshoe powered exploration of the wild and slushy landscape.  As they romped through the Boise National Forest they studied snowshoe hare tracks, climbed inside the igloo, conducted a snow/water equivalency experiment, stumbled upon the SnowSchool Weather Station, dug snowpits and discussed snowpack depth.  All this with the unyielding enthusiasm of a group of kids who have been granted a much needed break from the normal classroom routine!  As the weeks have progressed more snow has come to central Idaho, thus making more recent SnowSchool pictures a bit more wintry.

A national program with 65 sites (locations) and over 30,000 participants across the snow-belt, SnowSchool has 6 sites in Idaho that serve upwards of 4,000 students every winter.  Below are some snapshots of recent Idaho SnowSchool action: 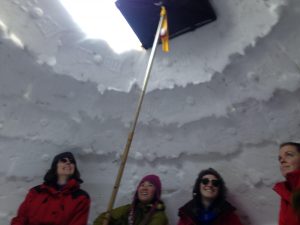 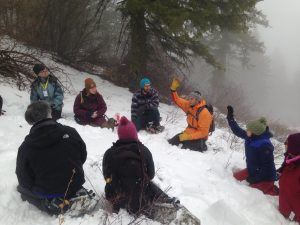 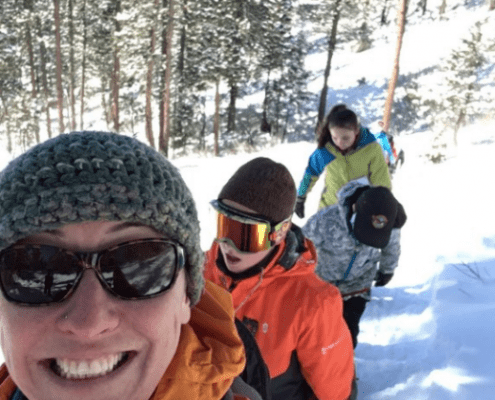 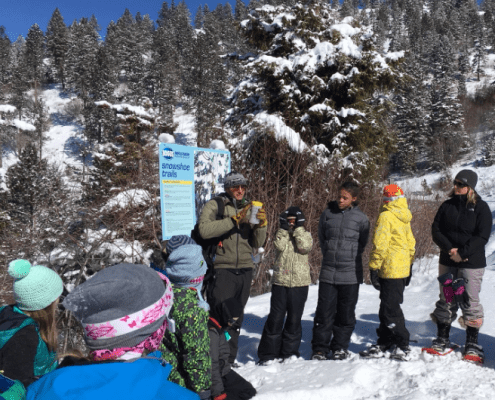 SnowSchool leader Josh Kissel gathers a sample of snow and introduces 5th grade students to the snow water equivalency experiment.  In this activity each student makes a hypothesis about the amount of the water that will result when the sample of snow is melted. WWA’s unique SnowSchool curriculum is designed to connect field experiences to K-12 classroom learning and align with national science standards.  Learn more at snowschool.org 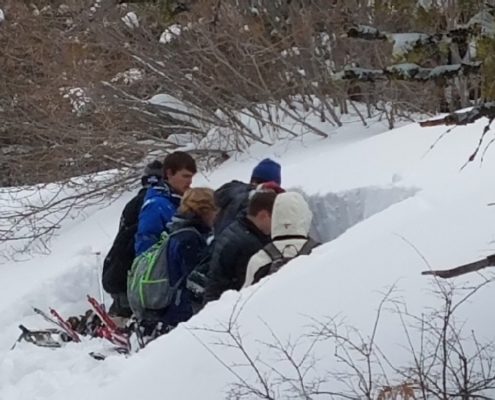 For many years SnowSchool was just for elementary students. However, in 2014 we partnered with Bogus Basin and NASA snow scientists to develop a unique curriculum especially for older students based on modern field techniques.  The result has created repeat SnowSchool experiences for hundreds of middle and high school this winter that builds on their same initial science adventure they completed as elementary school kids. Read more here. 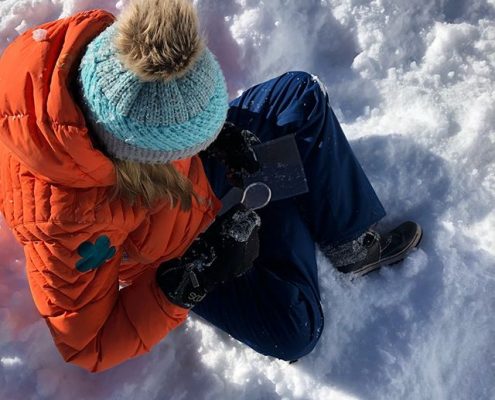 The Environmental Resource Center (ERC) near Sun Valley ID engaged students from Blaine County in a multi-week SnowSchool snow study.  Utilizing a partnership with the Sawtooth National Recreation Area and the Sawtooth Avalanche Center students at this site explored an array of complex snowpack phenomena. 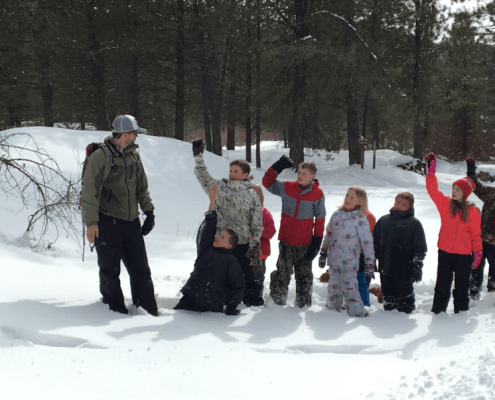 A new traveling SnowSchool program spearheaded in collaboration with the Boise National Forest brings the SnowSchool experience to rural schools that are surrounded by public lands.  Above, WWA SnowSchool Director Kerry McClay and 4th graders from Basin Elementary analyze a set of animal tracks found right across the street from their school. 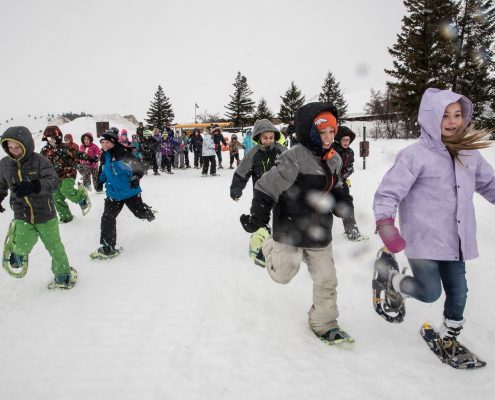 Further south at Craters of the Moon National Monument hundreds of students from the across the Snake River Plain made the trip to go snowshoeing and learn about this iconic landscape via SnowSchool.  Even a group of employees from the nearby CLIF Bar Factory in Twin Falls ID came out to snowshoe and investigate the SnowSchool buzz! Photo Credit- Dawn Kish Photography 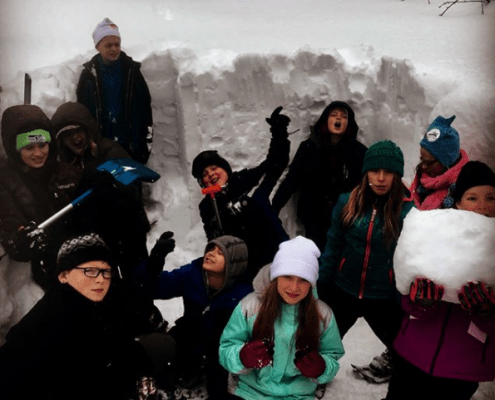 Of course the pure joy of deep snow cannot be denied, and it is in this respect that SOLE’s SnowSchool Experience program in Idaho’s Panhandle was the envy of the entire state.  With snowpack levels at Schweitzer Basin well above average, our Northern Idaho Flagship Site engaged hundreds of under-served students from surrounding communities! – Photo credit Dennison Webb 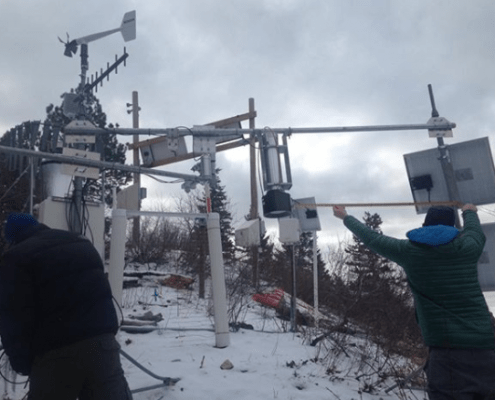 SnowSchool students in Idaho and across the nation actively use weather station data to better understand the ever-changing snowpack once they are back in their classroom.  Support from USFS, NRCS Snotel and Boise State University snow scientists makes this possible nationally.  Above, scientists Tom Black and HP Marshall add new instruments to the SnowSchool Weather Station. 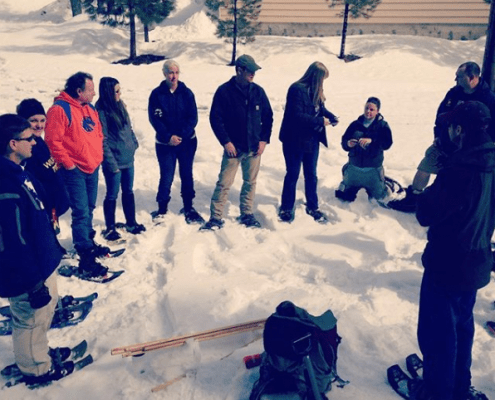 In early March WWA hosted a district-wide workshop for teachers from the rural Basin School District.   The goal was to help facilitate the expansion of SnowSchool to all grade-levels.  Elementary teachers, middle/high school teachers, a principal, the district science curriculum director and a USFS hydrologist all participated.  Big plans are on the way for next year!