APRIL 2018 — With this month’s publication of a final environmental impact statement (FEIS), the Lassen National Forest, the first forest in the country to write a complete winter travel plan under the Over-Snow Vehicle Rule, is almost done with winter travel planning. We have one more opportunity to tweak the plan, through the objection process, and then the plan will be finalized.

Overall, we feel that the Lassen did a decent job. It’s not the exact plan we would have written had we been in charge, but with a handful of exceptions (see below) the majority of important non-motorized recreation areas, winter wildlands, and important wildlife winter habitat areas are protected.

The draft plan designates 6 areas for OSV use, totaling 762,920 acres (or 66 percent) of the forest. It also designates 380 miles of National Forest System snow trails within the Lassen National Forest. This does not include the many more hundreds of miles of ungroomed OSV trails that are within designated open areas. OSV use is prohibited outside of the designated areas. 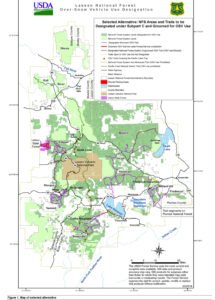 Lassen NF Selected Alternative: Areas and Trails to be Designated for Over-Snow Vehicle (OSV) Use

In the draft plan, approximately 387,100 acres of the forest are not open to OSV use, which nearly doubles the amount of non-motorized protection under current management. Most of the areas Winter Wildlands Alliance and Snowlands Network specifically identified as important for non-motorized recreation are not designated for OSV use in this draft plan, including Colby Mountain, Eagle Lake, and areas around the Bizz Johnson National Recreation Trail and Hog Flat reservoir.

We are disappointed that the draft plan designates both the Butte Lake and Lake Almanor areas for OSV use and doesn’t fully recognize the McGowan National Recreation Trail. These are places where we have advocated for quiet recreation. The Butte Lake area also contains important wildlife habitat. We still feel that the Forest Service can protect the quiet recreation and wildlife habitat values in these two places while addressing the OSV community’s access concerns, and we will be filing an objection to advocate for these protections.

The McGowan National Recreation Trail was designated as a non-motorized cross-country ski trail in 1981. However, the draft plan designates the western portion of the trail, and the area around it, for OSV use. We believe this is a misunderstanding, and are working to ensure that the McGowan National Recreation Trail remains a non-motorized cross-country ski trail.

In the Butte Lake area, the motorized community has expressed a desire to ride on a couple of specific trails but they do not travel far off trail. We have previously suggested that the Forest Service not allow cross-country OSV use in Butte Lake but rather designate trails within the suggested non-motorized area to allow OSV travel and connectivity between open areas.

Likewise, we have advocated for a non-motorized area on the southwest shore of Lake Almanor because skiers use the Lake Almanor Recreation Trail in winter. It has come to our attention that the non-motorized area we have advocated for might block access between a designated OSV area and a commonly used parking area. Rather than allow OSV use along the entire southwest shore of the lake, including on the ski trail (as stated in the draft plan), we feel a more balanced solution would be to allow OSV use where necessary and reasonable to allow users to get from the parking area to the Jonesville OSV area, while keeping the area around Lake Almanor Recreation Trail non-motorized. 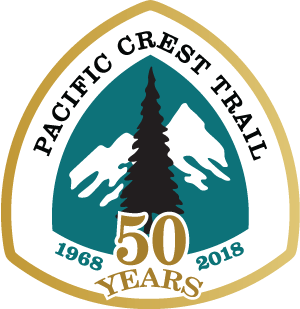 The Pacific Crest Trail is a National Scenic Trail and Congress has mandated that the trail be non-motorized. The Lassen’s draft winter travel plan, however, would manage the Pacific Crest Trail as non-motorized in name only during the winter. Under the draft plan, OSV use would be allowed right up to the very edge of the trail for much of its length through the Lassen National Forest, although OSVs would technically only be allowed to cross the trail at 17 designated crossing points.

We don’t see how the Forest Service will enforce these designated crossing points and we don’t believe this management complies with the letter or spirit of the Pacific Crest Trail Comprehensive Plan. Several of the Alternatives that the Forest Service analyzed included a 500-foot non-motorized buffer around the Pacific Crest Trail, with designated trails and crossing points to ensure OSV connectivity across the trail. The Forest Service’s own analysis supports the need for a non-motorized buffer in order to comply with the PCT Comprehensive Plan and we agree.

The draft plan does far more to protect wildlife habitat on the Lassen than either the current management or the previous (2017) draft plan. It protects winter deer habitat around Cinder Butte and Child’s Meadow and in low elevation areas like Fall River and Shasta by not designating these areas for OSV use. Likewise, the draft plan protects yellow-legged frog habitat in the Butt Mountain and Cub Creek areas, and in Child’s Meadow. However, the plan does little to address the Lassen’s rarest forest carnivore – the Sierra Nevada red fox. 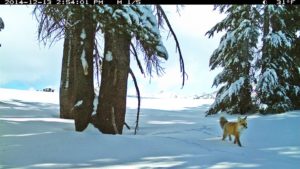 This picture of a Sierra Nevada red fox in December 2014 was the first confirmed detection in Yosemite in nearly a century. Two were captured near the Lassen NF this past winter. NPS photo.

There are estimated to be only 63 Sierra Nevada red fox in the Cascade population, (which is one of only two populations world-wide and includes animals ranging from the Lassen to Mt. Hood). In the FEIS the Forest Service states that little is known about how OSVs impact fox and therefore assumes the impact to be benign. As a result, the Forest Service decided that this species is not a significant concern in terms of OSV management. It’s true that little is known about how OSV use impacts Sierra Nevada red fox but researchers captured and collared two Sierra Nevada red fox on the Lassen this past winter with the intent of learning more about the species. We believe that the Forest Service should error on the side of caution and be conservative in protecting red fox habitat until we learn more about how OSV use does, or does not, impact the species.

In the draft plan, cross-country OSV use is not allowed unless there is at least 12 inches of snow on the ground, as measured and reported by the Forest Service. This 12-inch minimum snow depth will help to protect vegetation and guard against soil compaction. Unlike in previous versions of this plan, the current draft plan includes specific plans for how the Forest Service will measure snow depth and notify the public about when minimum snow depths are met and OSV areas are open.

A meaningful minimum snow depth is an important tool for minimizing OSV impacts on natural resources and we’re pleased to see this incorporated into the draft plan. However, we are concerned that the draft plan allows OSV use on trails when there is just 6 inches of snow. As the Forest Service’s analysis describes, 6 inches is insufficient to protect vegetation and soils and we aren’t confident that OSV users will stick to the designated routes when there is less than 12 inches of snow on the ground. We are concerned that the 6-inch exception for trails will undermine the broader 12-inch minimum snow depth.

A Step Forward for Balance and Quiet Recreation

We’ve been working on winter travel planning on the Lassen National Forest since 2015. Back then, the Forest Service didn’t really understand how to do winter travel planning in accordance with the new Over-Snow Vehicle Rule. At the same time, the ski community wasn’t super engaged in the process. At the first public meeting the Forest Service hosted, back in 2015, there were only two skiers in the room. A WWA staffer and a Snowlands board member. At the last public meeting the Forest Service hosted the number of skiers and snowmobilers present was roughly equal. Hundreds of skiers submitted public comments on the draft EIS in November 2017.

The Forest Service has shifted course on how they approach winter travel planning, which has resulted in a much better plan than the one we objected to last year. These are important gains that we will build off of as we move forward with winter travel planning elsewhere in the Sierra Nevada and across the country.