Winter Wildlands Alliance staff and Board of Directors convened at headquarters in Boise early in June for our annual summer board meeting, highway cleanup and whitewater session. We’re dialing in a new strategic plan and it’s always inspiring to gather together and talk about WWA’s future and the opportunities and challenges ahead.

And speaking of the future, we’re excited to welcome our new Backcountry Film Festival Manager, Melinda Quick! She’ll be starting July 16. Stay tuned for more on Melinda and her plans for the upcoming festival season.

Farm Bill and the Roadless Rule

On June 21, the House passed its version of the 2018 Farm Bill. The bill contains two attacks on the Roadless Rule: 1) a loophole that would allow logging and roadbuilding in about 10 million acres of roadless areas; and 2) an exemption from the Rule for Alaska’s national forests.

In addition to targeting the Roadless Rule, it also contains several attacks on bedrock environmental laws including the Endangered Species Act, National Environmental Policy Act (NEPA), and the National Forest Management Act. Taken together, the provisions in the House bill would essentially exempt everything the Forest Service does in the forest management space from environmental review to public input.

Early next week, please contact your Senators to support the Senate’s effort to produce a bipartisan farm bill by including a federal forestry title focused on conservation, collaboration, and other bipartisan policies. There will likely be a Conference Committee the following week to reconcile the two versions of the bill and get it signed into law in August.

It wouldn’t be a Winter Wildlands Alliance policy update without talking about winter travel planning. We submitted comments on the Tahoe draft EIS on May 25th (you can read our comments here). WWA worked closely with our two local grassroots groups – Snowlands Network and Tahoe Backcountry Alliance – to draft these comments, which generally support the Forest Service’s proposed action with a few key modifications to protect super-important backcountry ski zones for non-motorized recreation. 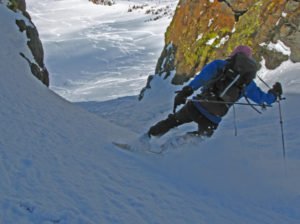 Human-powered on the Eldorado NF. Photo by Erik Bennett

Now, our attention has turned to the Eldorado winter travel plan.

The Eldorado National Forest, just south of the Tahoe NF, published its draft EIS on June 22. Comments are due August 6. We’re just starting to dig into the draft plan, but so far it’s not looking good. Unlike the Tahoe, which analyzed a wide range of alternatives and had a pretty decent DEIS overall, 3 out of 4 of the Eldorado’s alternatives are basically the status quo with minor differences.

The one exception is the alternative that we developed (Alternative 3), which focuses OSV use in areas that receive consistent snowfall, where there is existing OSV infrastructure (trails and staging areas), and where it doesn’t conflict with non-motorized recreation.

Once we finish reviewing the Eldorado DEIS we’ll post information on how to comment as well as our analysis and suggested talking points on our website here.