The Lassen National Forest, which straddles California’s northern Sierra and southern Cascades and surrounds Lassen Volcanic National Park, was the first forest in the country to write a comprehensive winter travel plan under the 2015 Over-Snow Vehicle (OSV) Rule. The forest published its Record of Decision (ROD) and Final Environmental Impact Statement for its winter travel plan on June 27, 2022. Click here to go to the Forest Service project page and access all the ROD, FEIS, and all other project documents.

Overall, we felt that the Lassen did a decent job. It was not the exact plan we would have written had we been in charge, but with a handful of exceptions the majority of important non-motorized recreation areas, winter wildlands, and important wildlife winter habitat areas are protected.

Click here for all documents related to Lassen’s Over-Snow Vehicle Use designations.

Human-Powered on the Lassen National Forest

The Lassen National Forest published a winter travel plan in June, 2022. The Lassen NF started working on OSV planning in 2015 – the first forest in the nation to implement the OSV Rule. With some stops, starts, and re-dos, the Lassen set a course for how to go about writing a winter travel plan and complying with the OSV Rule. We have been involved at each stage of the process to ensure that the forest minimized use conflict and impacts to resources and wildlife and to protect vital human-powered recreation experiences. Now that the plan is complete, we will continue to work with the Forest Service on monitoring and implementation.

After considering all of the public’s comments on the draft EIS the Forest Service modified Alternative 4 to include elements of Alternative 3  and published a draft plan, otherwise known as the “Selected Alternative.” The draft plan and final EIS were put out for public review in in August 2016.

This initial draft plan was an improvement  over the status quo but was still quite flawed. It would have allowed snowmobiles on one of the few official cross-country ski trails on the Lassen National Forest – the Dry Lake trail, which is part of the McGowan cross-country ski trail system – and did not go far enough in protecting quiet non-motorized recreation experiences on and around the McGowan ski trails.

The draft also did not meet the requirement of managing the forest as “closed [to over-snow vehicles] unless designated open” and low elevation areas that rarely receive snow, including 50% of the forest’s mule deer winter range, remained open to snowmobiles. While the previous draft did prohibit motorized use within many of the important non-motorized recreation areas on the Lassen, it missed the mark when it came to thoughtfully designating specific areas where over-snow vehicle use is appropriate and instead relied on the old paradigm of allowing OSV use everywhere except specific areas where it was prohibited. You can find out more about the Lassen’s 2016 draft plan in this blog post.

In September 2016, Winter Wildlands Alliance and Snowlands Network filed an official objection to the Lassen’s draft winter travel plan, asking that the Forest Service do more to address the concerns outlined above.  Several other organizations filed objections as well.  In response, the Forest Service went back to the drawing board and developed a new Alternative and re-worked their Environmental Impact Statement.

The Lassen released a new Revised Draft Environmental Impact Statement (RDEIS) for its winter travel plan in October 2017. Public comment closed on November 20, 2017, and more than half of all comments submitted came from members and constituents of Winter Wildlands Alliance!

We Supported the New Alternative 5

The new draft plan contained a much more thorough environmental analysis than the 2016 version, and also included an encouraging new alternative — Alternative 5 — developed in response to objections.

The 4 alternatives from the 2016 DEIS were still included, with a few modifications to bring them (mostly) in compliance with existing laws and policy. All of the alternatives now identified specific areas where OSVs are to be allowed and prohibit OSV use outside of these areas. This corrected approach was a big improvement. However, the Forest Service’s “Modified Proposed Action” (Alternative 2) was otherwise almost exactly the same as what was proposed in 2015 — it did not protect important quiet recreation areas or wildlife habitat and would designate as open for OSV use low elevation areas that rarely receive snow. Likewise, Alternatives 3 and 4 are also essentially the same as in 2015.

Alternative 5, however, addressed all of the concerns that we had with the previous draft plan, and laid out a winter travel plan that balances motorized winter recreation with quiet recreation and protection of wildlife and the environment. Alternative 5 designated OSV use areas in places where people actually go snowmobiling (preserving all of the opportunities the snowmobile community values) and didn’t designate places that don’t make any sense (like low elevation areas that don’t get snow).

Alternative 5 also did a much better job of protecting wildlife habitat – not designating any critical deer winter range as open for OSVs – and didn’t designate OSV use within any of the quiet recreation areas that we identified. In addition, Alternative 5 contained protection for the quiet, non-motorized character of the Pacific Crest Trail by prohibiting OSV use within at least 500 feet on either side of the trail, except at a few designated crossing points.

Finally, alternative 5 designated a 12-inch minimum snow depth standard across the forest – meaning that OSV use would not be allowed on any trails or in any areas until those trails/areas have a minimum of 12 inches of snow. This snow depth standard would protects underlying resources including soils, vegetation, and subnivian habitat, and also complies with State of California OSV grooming standards.

In June 2022 the Forest Supervisor signed a Record of Decision for the Lassen OSV Plan, selecting a modified version of Alternative 5 as the final plan. The final plan designates 747,192 acres (or 65%) of the forest for OSV use. The final plan designates additional acres, primarily in the Swain Mountain OSV Area, that were not included in the 2017 version of Alternative 5. The final plan requires 12 inches of compacted snow for cross-country OSV travel. It does not designate OSV use in low elevation areas of the forest that rarely receive enough snow to accommodate winter recreation.

Under the new plan, OSVs can travel on designated routes once there is 6 inches of snow. Approximately 349 miles of trail are designated for OSV use and grooming. Grooming is not allowed until the snow depth is at least 12 inches, per California state grooming standards. The plan also designates 62 miles of ungroomed OSV trails. There are many hundreds of miles of trails (primarily snow covered roads) where OSV can ride within designated areas that are not considered designated trails in this travel plan but are open to OSV use after 12 inches of snow have accumulated.

The final OSV plan does not designate OSV use in many of the areas that WWA and our partners worked to protect for quiet recreation, including the McGowan National Recreational Trail, Elam Creek/Carter Meadow, the West Shore of Lake Almanor, and the West Shore of  Eagle Lake. Unfortunately, the popular cross-country ski and snowshoe trails at Hog Flat are only partially protected – the trails are non-motorized but the area surrounding the trails is designated for OSV use. Most of the PCT, as it travels through Lassen NF, will provide a quiet winter experience. However, the final plan designates OSV use adjacent to the PCT along approximately 55 miles of the trail, with 12 designated crossings. The final plan allows OSV users to cross the trail within one quarter mile of the designated crossing point. 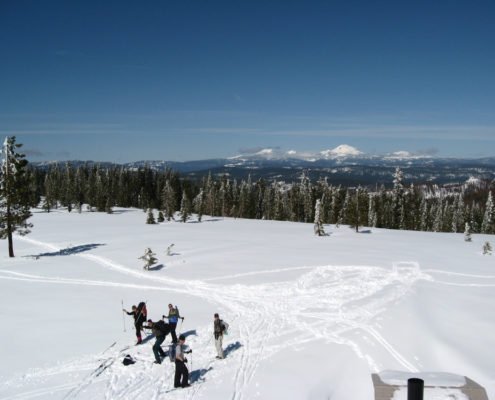 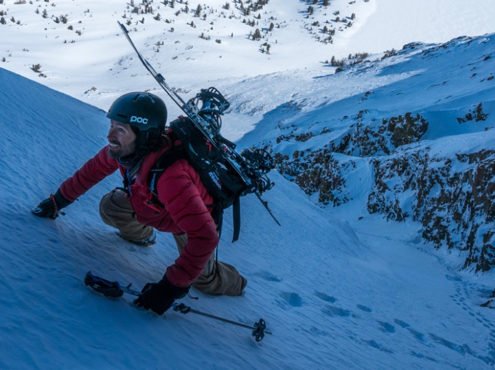 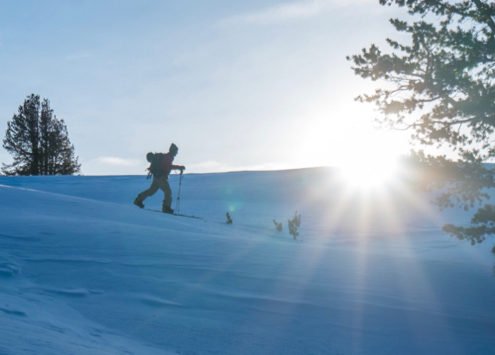