On October 3, 2017, the Lassen National Forest released a Revised Draft Environmental Impact Statement (RDEIS) for its new winter travel plan. The final public comment period on the plan closes November 20. The Lassen, which straddles California’s northern Sierra and southern Cascades and surrounds Lassen Volcanic National Park, is the first forest in the country to write a comprehensive winter travel plan under the 2015 Over-Snow Vehicle (OSV) Rule, so what happens here is very likely to impact winter travel planning across the country.

Forest planners want to get it right on the Lassen, and have assured us that they are eager to incorporate substantive comments into the final plan, so we hope to get as many skiers and human-powered winter enthusiasts as possible to send in comments. Read on for some quick background and our notes and concerns on this latest revised draft, or click here to send the forest service your comments using our handy template.

As the guinea pig (or, perhaps, avalanche poodle), the Lassen NF has been working since 2015 — with some stops, starts, and re-dos — to set a course for how to go about writing a winter travel plan and complying with the OSV Rule. As we go through the process with them, we’re also learning – how to clearly articulate our winter travel planning vision to the Forest Service, how and when to reach out to other stakeholders, and how to better engage you – our members and supporters.

The forest published an initial draft Environmental Impact Statement (DEIS) in early 2016. The 2016 DEIS analyzed four Alternatives, or potential plans, including one based on the “Skiers Alternative” submitted by WWA and Snowlands Network. At that time, we told the Forest Service that we supported the skiers alternative, with modifications to account for impacts to wildlife, wilderness lands, and natural resources (exhibit A of us learning as we go – when we developed the skiers alternative we left too much to interpretation and the Forest Service’s interpretation wasn’t quite in line with our vision).

After considering all of the public’s comments on the DEIS the Forest Service wrote a “Selected Alternative”, or draft plan, which they put out for public review in August 2016.  This 2016 draft plan was a slight improvement over the status quo but did not meet the requirements of the OSV Rule on many fronts. For example, the plan did not propose management of snowmobiles under the new legally mandated framework of “closed unless designated open.” Instead, it proposed the opposite, identifying a few areas to close to over-snow vehicles and leaving the rest of the forest open to OSVs by default.

In September 2016 Winter Wildlands Alliance, Snowlands Network, and 6 other organizations filed objections to the Lassen’s draft winter travel plan. In response, the Forest Service went back to the drawing board to develop a new alternative and revise their draft Environmental Impact Statement.

Which brings us back to this newly-released Revised Draft Environmental Impact Statement (RDEIS) and the current comment period.

We Support the New Alternative 5

The new draft plan contains a much more thorough environmental analysis than the 2016 version, and also includes an encouraging new alternative — Alternative 5 — developed in response to objections.

The 4 alternatives that had been in the 2016 DEIS are still included, with a few modifications to bring them (mostly) in compliance with existing laws and policy. All of the alternatives now identify specific areas where OSVs are allowed and prohibit OSV use outside of these areas. This corrected approach is a big improvement. However, the Forest Service’s “Modified Proposed Action” (Alternative 2) is otherwise almost exactly the same as what was proposed in 2015 — it does not protect important quiet recreation areas or wildlife habitat and would designate as open for OSV use low elevation areas that rarely receive snow. Likewise, Alternatives 3 and 4 are also essentially the same as in 2015. 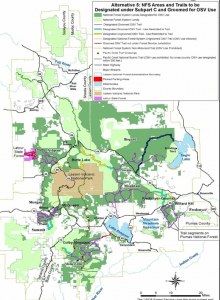 Alternative 5: Areas and Trails to be Designated under Subpart C and Groomed for OSV Use (Click for larger version)

Alternative 5, however, addresses all of the concerns that we had with the previous draft plan, and lays out a winter travel plan that balances motorized winter recreation with quiet recreation and protection of wildlife and the environment. Alternative 5 designates OSV use areas in places where people actually go snowmobiling (preserving all of the opportunities the snowmobile community values) and doesn’t designate places that don’t make any sense (like low elevation areas that don’t get snow).

Alternative 5 also does a much better job of protecting wildlife habitat – not designating any critical deer winter range as open for OSVs – and doesn’t designate OSV use within any of the quiet recreation areas that we identified. In addition, Alternative 5 protects the quiet, non-motorized character of the Pacific Crest Trail by prohibiting OSV use within at least 500 feet on either side of the trail, except at a few designated crossing points. Finally, alternative 5 would designate a 12-inch minimum snow depth standard across the forest – meaning that OSV use would not be allowed on any trails or in any areas until those trails/areas have a minimum of 12 inches of snow. This snow depth standard protects underlying resources including soils, vegetation, and subnivian habitat, and also complies with State of California OSV grooming standards.

The Forest Service has assured us that they do not have a preferred alternative at this time. All options, including everything in Alternative 5, are on the table. For this reason, it’s incredibly important that people participate in this public comment period. Whether you’re a local who can speak to particular areas on the forest, or somebody who’s never set foot in northeastern California but cares deeply about winter travel management on National Forest lands, this comment period matters. Alternative 5 sets a really good course for the Forest Service as it embarks on winter travel planning, and provides a good example for other forests to follow. We appreciate the effort that the agency has put into developing this alternative and we’d love to see the final plan closely resemble it.

We urge you to comment in support of Alternative 5 before the comment period closes on November 20, and we’ve developed a nifty online commenting portal to help you do so.