FOR AS LONG AS I’VE BEEN BACKCOUNTRY SKIING, Memorial Day weekend has been an important part of my ski season. It’s when the Beartooth Pass just outside of Red Lodge, MT opens for the summer, providing easy access to high elevation spring snow from an 11,000 ft. starting point. From steep couloirs to crust cruising across alpine plateaus, the Pass provides everything my little skier heart desires. And, skiing there reminds me why the work we do with Winter Wildlands Alliance is so important. 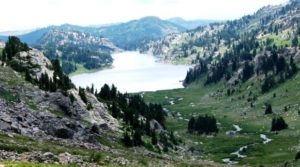 Much of the terrain that skiers access off of the Pass is within the High Lakes Wilderness Study Area in Wyoming and has been protected to preserve wilderness character for the past 33 years. WSA status has protected the area from road building and other forms of development, prohibited summer motorized use, and limited how much snowmobiling occurs. Right now, however, the future of this WSA is up for debate and non-motorized recreation and conservation interests are getting the short end of the stick. At the same time, the two national forests accessed from the Pass, the Shoshone and Custer Gallatin, are working on plans that will directly impact future backcountry skiing experiences across each forest. Winter Wildlands Alliance is involved in all of these conversations and planning efforts, advocating to protect wild and quiet snowscapes.

We’re also working hard in California, which continues to be the center of attention when it comes to winter travel planning. Last month, just as we neared the finish line on the Lassen winter travel plan, the Tahoe published a draft environmental impact statement (DEIS) for its winter travel plan. Overall we’re pretty happy with what the Tahoe is proposing. We’re advocating for a few targeted changes to the preferred alternative to address lingering concerns around popular backcountry and Nordic ski zones. 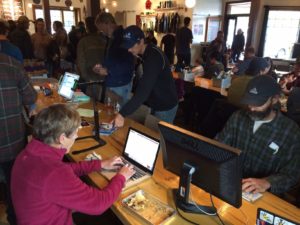 Unfortunately, misinformation has been spreading like wildfire through the Tahoe snowmobile community and many are under the impression that the Forest Service (and Winter Wildlands Alliance) is out to shut down snowmobiling on the forest. They’ve rallied thousands of comments and gotten the local ultra-conservative Congressmen fired up. Skiers have been bullied and intimidated and many are shying away from commenting. Click here for coverage of the controversy and process by the Reno Gazette Journal.

We need backcountry skiers, splitboarders, Nordic skiers and snowshoers to speak up and provide substantive and thoughtful comments!

We’ve got tons of information on our website. Please, if you haven’t already, take a moment now to comment on the Tahoe travel plan and to share the comment page with all your friends and ski partners.

Finally, no policy update is complete without a nod to D.C. It seems that no major piece of legislation is complete these days without an attack on National Forest roadless areas. First we had the budget bill, where Senator Murkowski (R, AK) tried (and failed) to insert amendments that would have exempted Alaska’s national forests from the Roadless Rule. Then we had the House Farm Bill.

“While some snowmobile riders are worried about losing forest access, others who have studied the proposal say potential losses are less drastic than some perceive. ‘We are not trying to get rid of snowmobiling altogether,” said Jim Gibson, vice president and secretary of Snowlands. “We just think the current 85% motorized/15% nonmotorized split needs more balance.'” — Benjamin Spillman, Reno Gazette Journal

Because the Forest Service is within the Department of Agriculture, the Farm Bill includes provisions that affect national forest lands. The bill includes convoluted language about roadless area management that could be interpreted to eliminate current regulatory protection of Inventoried Roadless Areas. And, more blatantly, the bill exempts Alaska’s national forests from the Roadless Rule to increase logging of old growth forests. Although the Farm Bill failed to pass on May 18, House Republican leadership is planning to bring the bill up for a second vote on or before June 22nd. The Senate is also working on their version of a Farm Bill, which we could see later this month. The Farm Bill is an important and complex piece of legislation that many people’s livelihoods depend upon. There’s no need to bog it down with unpopular, unnecessary, and controversial add-ons like these attacks on the Roadless Rule. Stay tuned. We’ll keep you posted on how it goes.