By Andy Dappen for Backcountry Magazine, 2016

For many skiers, the 50-year evolution of snowmobile use on public lands has represented an on-going loss of habitat. That’s certainly been my story. Places where I once cross-country skied or ski toured for peaceful exercise, soft turns, quiet ascents, or serene meditations have been consistently plucked from my plate as snowmobiles spread onto ever steeper slopes and into ever deeper snows.

The pace of change has been slow but relentless. My earliest losses occurred in the late 1960s when forest roads and flat meadows in the Mount Hood National Forest where I Nordic skied started seeing enough motorized use that the noise, speed, commotion, trammeled snows, and fumes undermined my experience. Back then it was easy to move off the roads or into forests to escape the machines.

Throughout the 1980s and 1990s, as the power of snowmobiles improved, some of my favorite telemark terrain near my home in Western Washington was gradually assimilated by the Borg. Again I moved – either into thicker trees or onto steeper slopes. 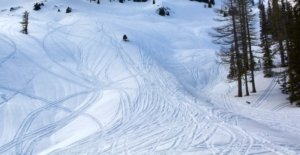 Over the last fifteen years the pace of loss accelerated as increased horsepower, improved track designs, better suspension, and new riding positions could put sleds on almost any open slope I hoped to ski. Meanwhile, snowbikes with their narrow tracks and maneuverability gave experienced dirt bikers an entirely new opportunity to ride off-trail in winter. Snowbikes can navigate forests, traverse steep slopes, or zig-zag through a jumble of snow-covered boulders with such dexterity that there were precious few places near plowed roads where I can be sure machines won’t disturb the quiet, natural experience I value.

All of this is could change soon due to new rulings supporting old laws. In 1972, The Nixon Administration issued Executive Order 11644 mandating federal agencies to create management plans for all off-highway vehicles. The executive order (EO) required federal land agencies to substantiate that, where permitted, off-highway vehicles would not negatively impact wildlife, erode other forest resources (soil, plants and water), or impact other users. In the earliest years, snow machines primarily traveled the snow-covered roads of the national forest. These were the same roads used by wheeled vehicles in summer, so the Forest Service opted to forego separate management policies for over-snow vehicles (OSVs).

In 2005 the Forest Service started a decade-long process of revamping its management policies for off-highway vehicles. Unfortunately, just as it had done earlier, the agency punted on creating wintertime management policies for OSVs. By now, however, the capability of new snow machines did not confine them to roads and, with no policy, if a machine could get there, it could go there.

The absence of winter policies was clearly inconsistent with the management of off-highway vehicles in other seasons. For years, the Winter Wildlands Alliance (WWA), a Boise based non-profit promoting human-powered winter recreation, prodded the Forest Service to follow the EO and create winter policies for OSVs. The Forest Service steadfastly refused, eventually forcing WWA to sue. In January 2015 Federal Courts ruled the Forest Service was clearly out of compliance and mandated each National Forest to create policies, complete with maps, defining where OSVs could travel.

This is terrific news for we who drink from the chalice of non-motorized winter recreation. Over the next few years each national forest must define corridors and ranges allowing OSV use as well as those areas that are closed to motorized use in winter. With the welfare of wildlife, other forest resources, and other forest users acting as benchmarks to guide the process, there is every reason to be optimistic that more quiet zones, fresh air, and stashes of soft snow will be returning to our national forests.

The bad news is that the Forest Service is an overworked, underfunded agency and some branches of the agency will be truculent — they will do their best to keep kicking the can down the road. Advocacy and involvement will help the cause. In the Okanogan-Wenatchee National Forest surrounding the town where I live today, our local backcountry skiing and snowshoeing club, El Sendero, has begun preparing articles for the media educating our citizenry about what is required of the Forest Service. Next, the club has asked forest administrators to define a time frame for initiating and completing the process.

El Sendero is also scheduling meetings with local snowmobile clubs to discuss designated zones where non-motorized recreationalists and motorized recreationalists can each pursue their passion without impinging upon the other group. These two groups will certainly have areas of disagreement, but by initiating respectful dialog and finding consensus on low- hanging fruit, we hope to avoid snow wars and to help the Forest Service fulfill its obligations.

Pressuring, haggling, deal-making … these are not tasks elevating the pulse of skiers and snowshoers. And yet this is a process non-motorized winter recreationalists should embrace. We have the law behind us, a court decision upholding the law, and guidelines defining the goals of winter policies. This gives us a long lever, a place to stand, and a generational opportunity to reclaim lost ground.