Hilary is an avid backcountry skier and climber with a passion for wild landscapes.  Hilary works on National Forest winter travel management and other policy issues that affect backcountry skiers.  She previously worked on public lands conservation in Wyoming and Montana for the Greater Yellowstone Coalition and Wilderness Society.  She holds degrees in wildlife biology and conservation biology and works for Winter Wildlands Alliance from Bozeman, MT.  heisen@winterwildlands.org

David is a national award-winning journalist and senior correspondent for Powder Magazine based in Mammoth Lakes, in the heart of California’s High Sierra. His multimedia series on decision making in avalanche terrain, The Human Factor, was nominated for a National Magazine Award. Author of the popular Explorer’s Guide to Yosemite and the Southern Sierra Nevada, he’s also written for the Discovery Channel, The New York Times, the Los Angeles Times Magazine, Men’s Journal, Ski, Skiing, Ski Journal, Outside, Wilderness, and many other publications. As co-founder and former executive director of Mammoth Medical Missions, a non-profit international medical relief organization, and a co-founding board member of Mammoth Lakes Recreation, he brings significant local nonprofit experience to Winter Wildlands Alliance. dpage@winterwildlands.org 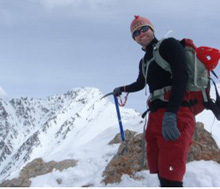 Kerry comes to the Winter Wildlands Alliance after helping establish the flagship SnowSchool site at Bogus Basin Mountain Recreation Area and serving as its first-ever director. Kerry is a graduate of the University of Montana, Prescott College and recently completed a doctorate in educational leadership at Boise State University. A backcountry enthusiast, Kerry focuses on enhancing the quality and scope of the SnowSchool program nationally, and each winter works to introduce thousands of students to the magic of on-snow exploration. In his own mind Kerry’s claim to winter-fame is that he invented “belly sliding” (ask for a demo the next time you see him). kmcclay@winterwildlands.org

Born and raised Idaho spud and outdoor adventure enthusiast, Melinda joins the WWA team after four years with Boise Film Festival. Melinda graduated from Sarah Lawrence College in 2012 and has since spent her time exploring the wildlands of Italy, South Africa, England, Germany and finally her hometown of Boise as a filmmaker and event/marketing coordinator. One of her favorite indoor activities is organizing her email inbox, but you can usually find her outside floating the Boise river, hiking, or backpacking. She is thrilled to join the WWA to lead the Backcountry Film Festival and hopes you send her any and all videos of your winter wildland adventures! mquick@winterwildlands.org

Ilyse comes to Winter Wildlands Alliance from Bogus Basin where she served as Outdoor Education Coordinator, leading Bogus Basin SnowSchool and Mountain Discovery Camp. After graduating from Providence College in Rhode Island she served two terms with AmeriCorps in Boise and was introduced to environmental education. It was through this work she started to learn just how crucial and necessary it is to recognize the innate relationships we share with nature. Excited to continue her studies on education through nature she enrolled at The University of Edinburgh in Scotland where she studied Outdoor Education. Ilyse is humbled to join the Winter Wildlands Alliance team and be part of such a supportive network that works hard to promote, encourage, and advocate for places where individuals can explore and connect with the natural world. isakamoto@winterwildlands.org