Thanks to the vision and perseverance of El Sendero Backcountry Ski and Snowshoe Club, there’s a new winter non-motorized area for backcountry skiers, splitboarders, and snowshoers in Washington’s Eastern Cascades! 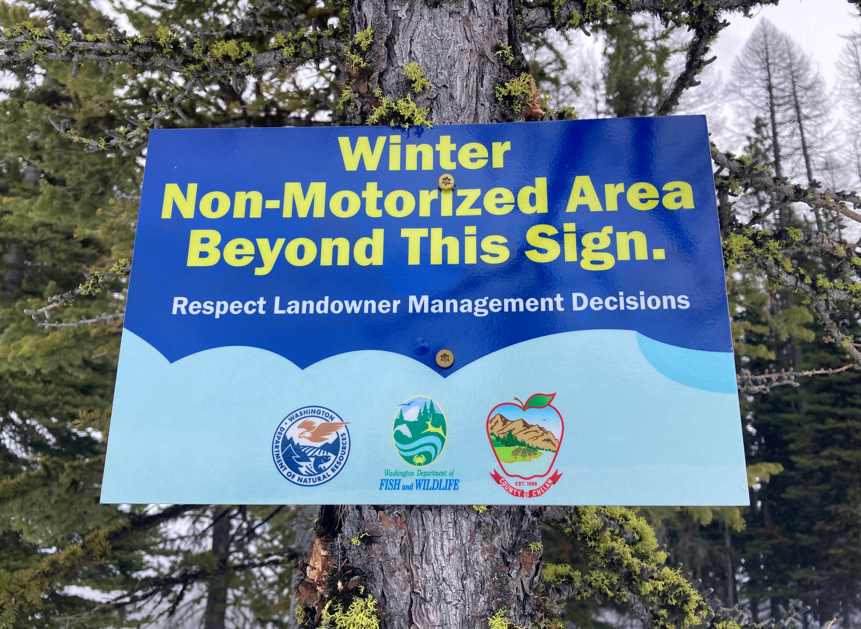 The area has great snow, fun terrain, and easy access. A skier’s dream. The only problem is that — similar to so many backcountry areas across the west — non-motorized users were being displaced from the area by snowmobiles. El Sendero knew that the only way to preserve backcountry ski and snowshoe opportunities was to advocate for a legally-protected NMA.

In 2012, El Sendero saw an opportunity to achieve their vision of a winter non-motorized area through a local state land management planning effort: the Naneum Ridge to Columbia River Recreation and Access Plan planning process (“the Naneum Plan”). After 3 years of meetings, negotiations between stakeholders, and public comment opportunities, the Naneum Plan was signed and approved by Washington state officials in 2015. It called for two winter NMAs of just under 4,000 acres. One to be established just east of Mission Ridge Ski Resort in an area called the Stemilt Basin, and the other just west of the Ski Resort in the Clara Lakes area.

Once the Naneum Plan was signed, El Sendero was excited to move forward with signing the boundaries of the NMAs and restoring an abandoned A-frame perched on the ridge between Stemilt and Mission Ridge to serve as a backcountry hut for skiers and snowmobilers.

What took so long?

Before the boundary could be marked, the Chelan County Natural Resource Department decided to embark on a recreation planning effort within the Stemilt and Squilchuck basins to improve recreation opportunities and protect community values and natural resources. Much of this landscape overlapped with the area covered by the Naneum Plan, and the State land managers decided to delay winter NMA finalization until after the local planning effort was complete.

The draft Stemilt-Squilchuck Recreation Plan was released in 2018, complete with two winter NMAs, which were consistent with the Naneum Plan. Unfortunately, upon seeing the winter NMAs in the Stemilt-Squilchuck Draft Plan, a small number of motorized users (who had not participated in the past several years of negotiations and planning) loudly advocated for the County to eliminate the proposed winter NMAs in the final plan.

For the winter NMAs to be saved, backcountry skiers, cross-country skiers, and snowshoers had to rally (again) and convince Chelan County to keep the NMAs in the plan. The final Stemilt-Squilchuck Recreation Plan was signed in September 2019 and included both NMAs, albeit with smaller acreage than the NMAs in the Draft Plan or the Naneum Plan.

A Decade of Work for El Sendero

Success was close at hand, but still, the work was not complete. El Sendero struggled with obtaining permission to create and install signs marking the NMA boundaries. Without the signs, the NMAs existed on paper only and were vulnerable to motorized intrusion for the 2019-20, 2020-21, and 2021-22 ski seasons.

This April, El Sendero finally received permission to install signs along one boundary of one of the non-motorized areas. The very same day that permission was granted, El Sendero board members began installing signs marking the most trafficked motorized intrusion point for the Lake Clara NMA. Within a week they protected the entire Clara NMA boundary with signs. They continue to work with the jurisdictions and hope to finish marking the balance of NMA boundaries soon.

After 10 years of dedicated effort, the dream has become a reality!

The two NMAs both have fantastic skiing and are accessible for day trips out of the ski area parking lot. The lower end of the Stemilt NMA is accessible from a snow park for quiet cross-country skiing and snowshoeing adventures. And, for those interested in an overnight tour, El Sendero has also been working to establish backcountry huts.

That’s amazing! But wait, what about the abandoned a-frame?

Although the landowner, Washington State Department of Natural Resources (DNR), initially agreed to the use of the A-Frame for a backcountry overnight hut, the neighboring Mission Ridge ski area objected. Because of this, El Sendero abandoned the plan to work with the local snowmobile club to restore it as a winter hut for skiers in the non-motorized area and snowmobilers in the motorized portion of Stemilt Basin.

Instead, El Sendero negotiated permission from DNR to construct a hut a mile to the east on the rim of the Stemilt Basin, well within the newly designated NMA. El Sendero set up the hut for the first time this fall, tested it out throughout the winter, and is excited to open it up for public rentals next winter!

“This has been a ten year-long process of meetings, field trips, and compromise to reach the end goal of winter non-motorized areas that are easily accessible and extremely important to the local community”, reflected Gus Bekker, President of the El Sendero Board of Directors.

He continued, “The true value of these areas will only continue to grow over the coming years as more and more people seek a place for quiet, solitude, and reflection in the winter.”

WWA has stood by El Sendero’s side, helped them to build support for their vision, and cultivate this win for human-powered winters in Washington. We are proud of the work they have accomplished and are grateful to have been a resource.

Thanks to the vision and perseverance of El Sendero, there’s a new winter non-motorized area for backcountry skiers, splitboarders, and snowshoers in Washington’s Eastern Cascades!

Check out the photos below of the El Sendero crew celebrating (credit Mike Rolfs). 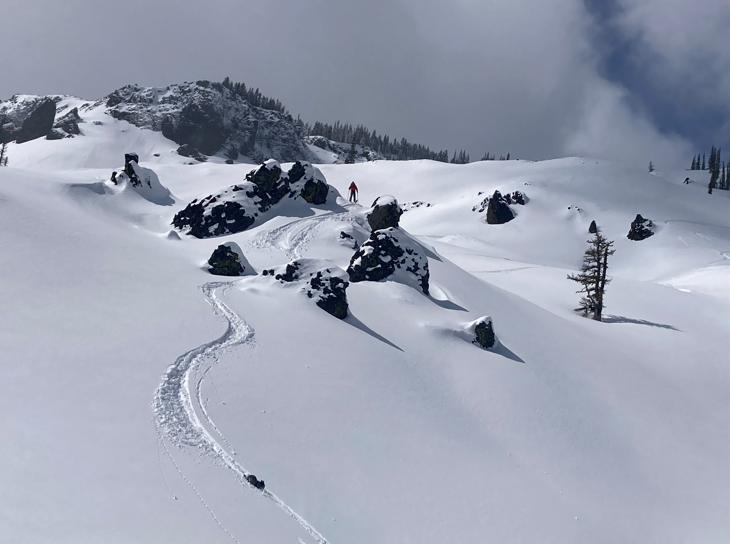 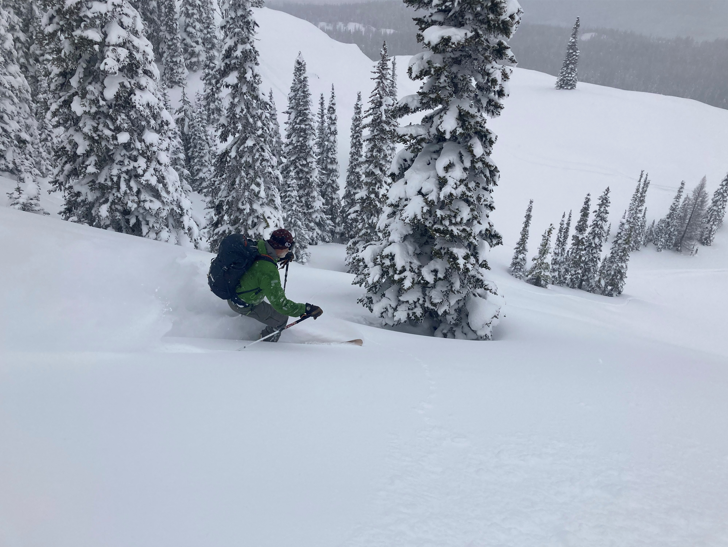 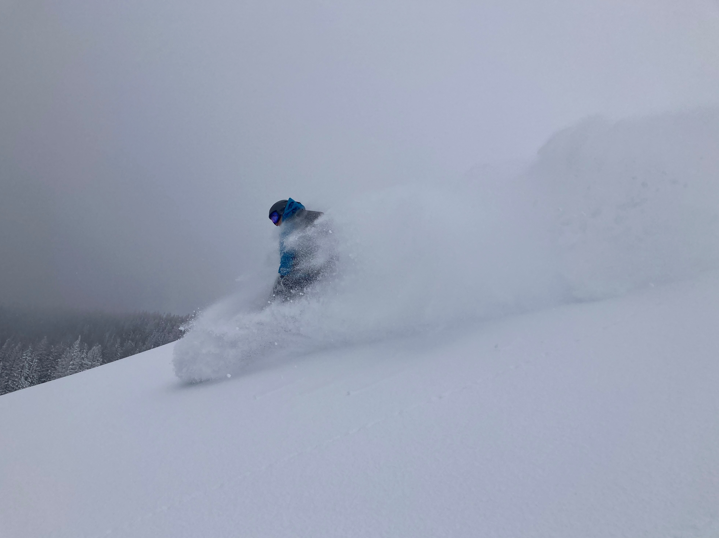 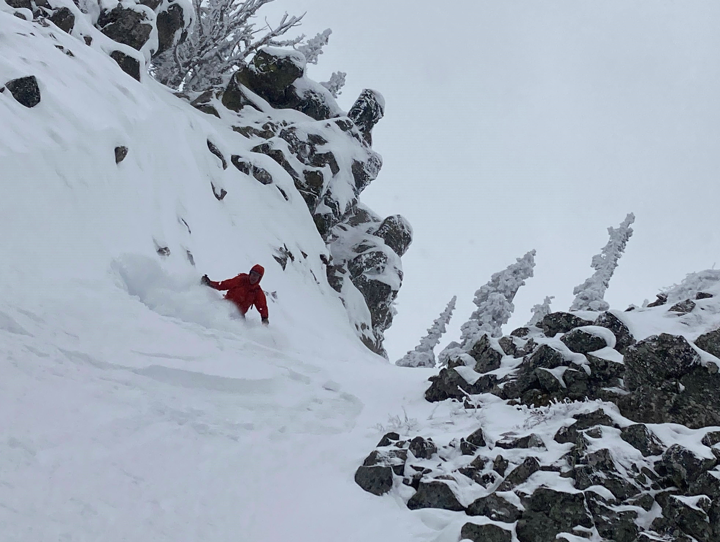 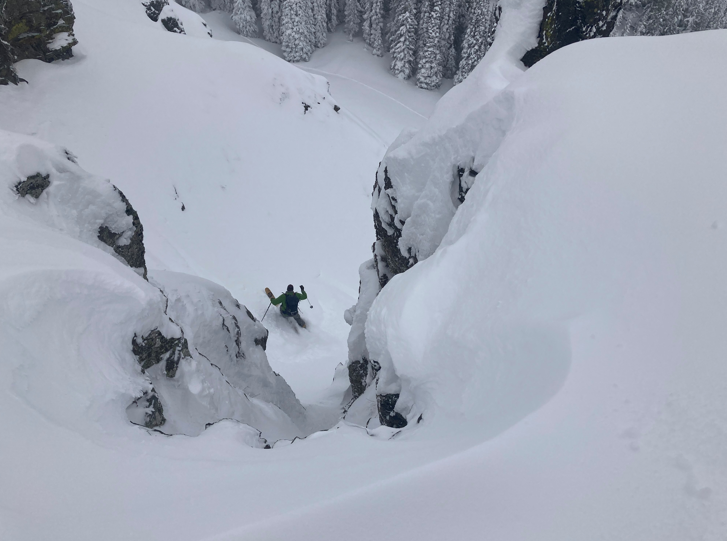 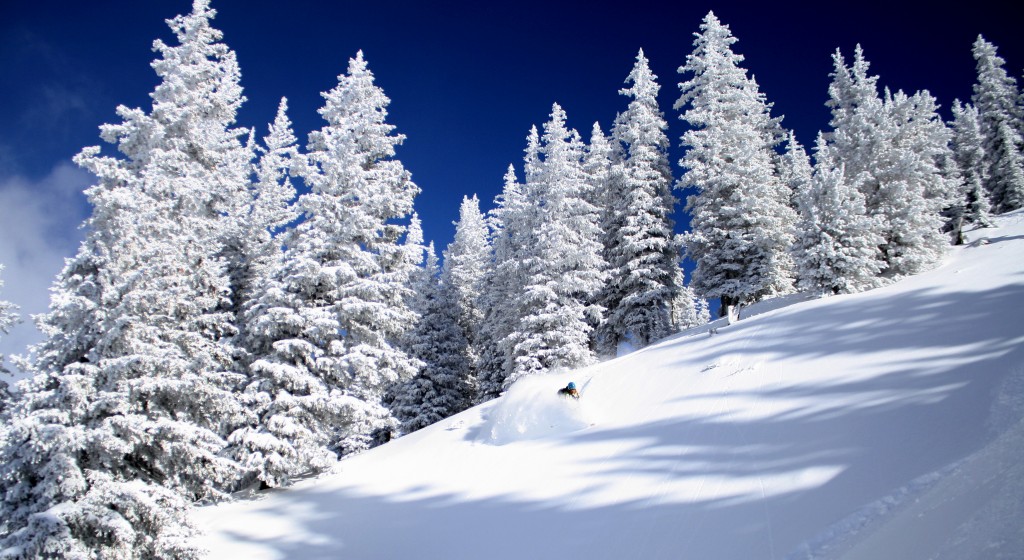 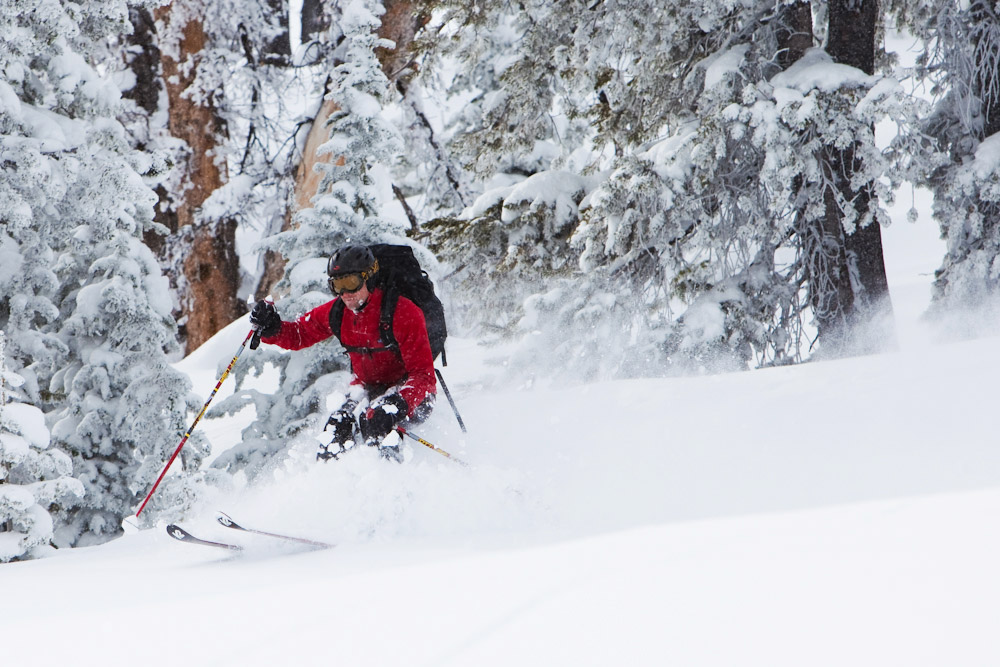 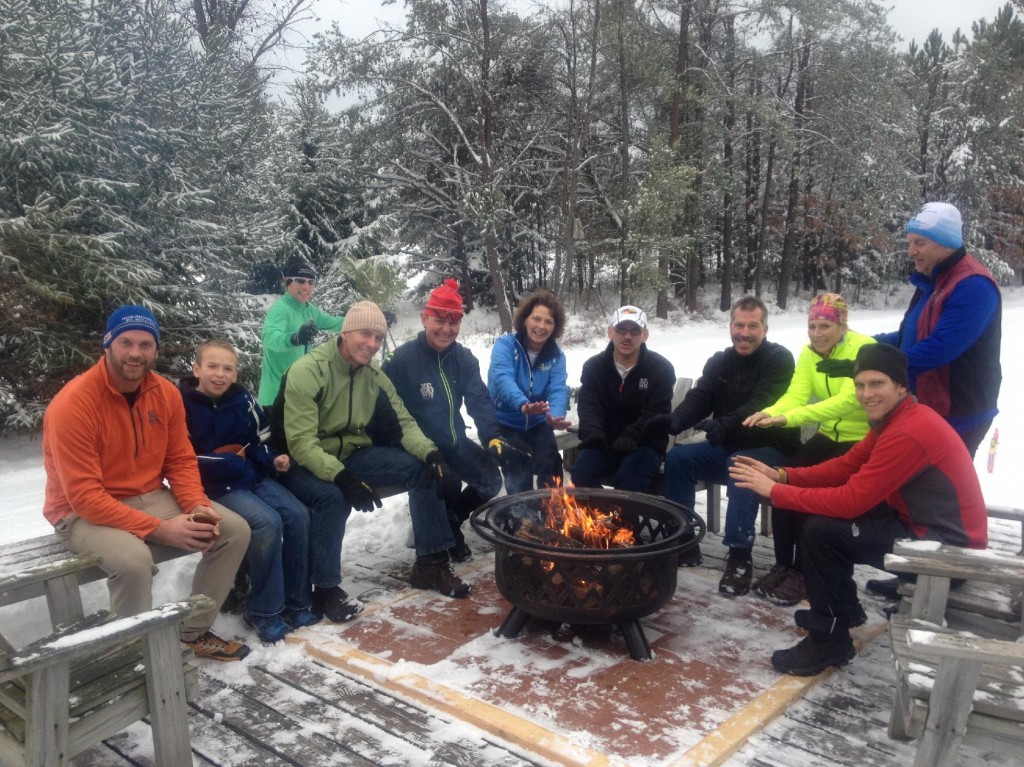 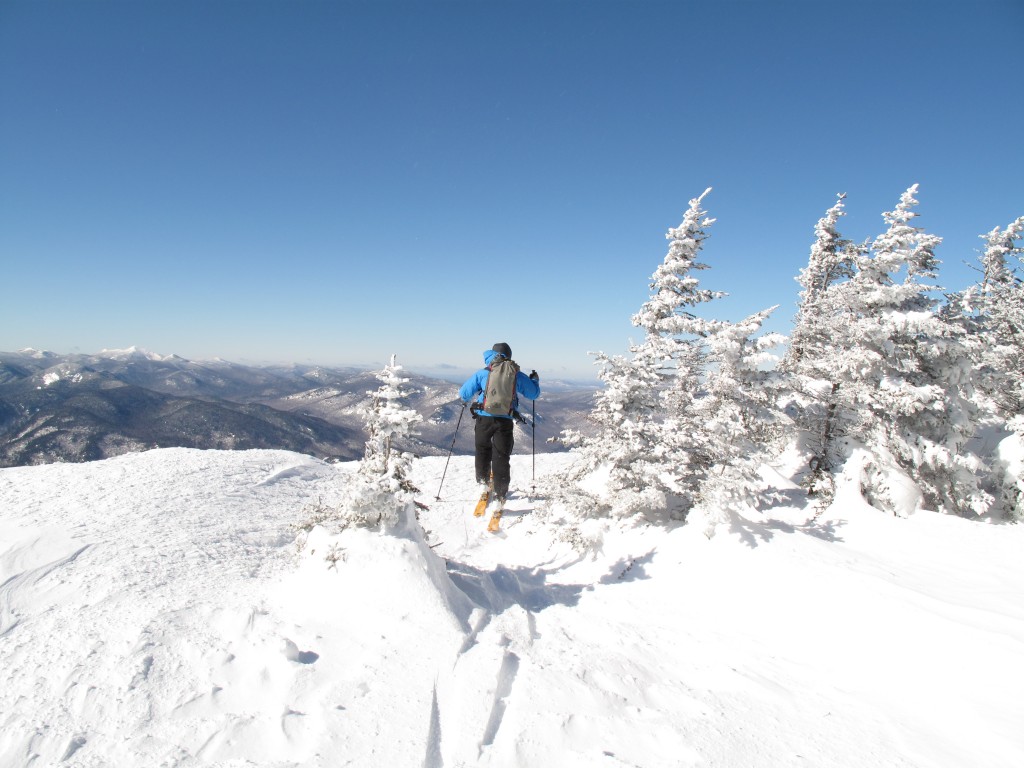 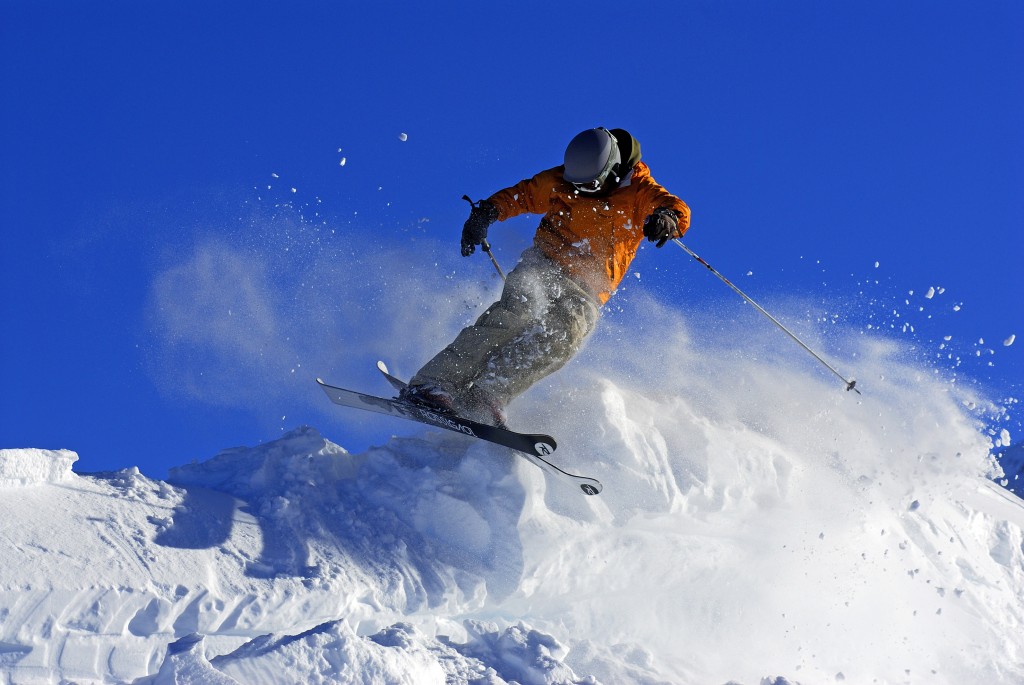