A SnowSchool educator and program director finds her place within WWA, and in the process makes the organization stronger and more inclusive 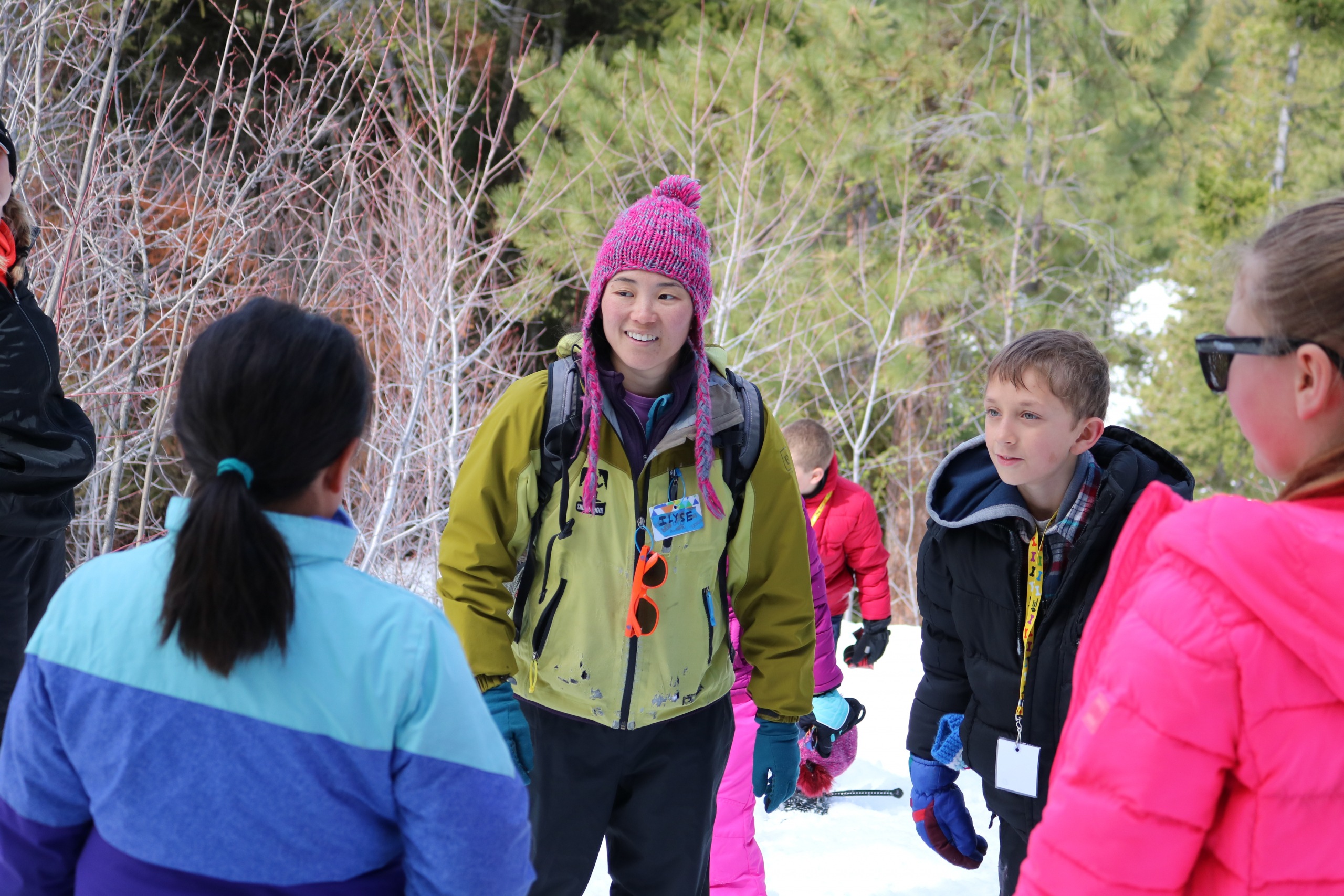 Photo Credit: WWA (On the ancestral lands of the Shoshone-Bannock and other Nations)

My introduction to Winter Wildlands Alliance was through my work as an outdoor educator at Bogus Basin SnowSchool in Idaho. I’d been an alpine skier from a young age, but as an adult working with kids I found myself connecting more deeply with snowshoeing than I ever had with skiing. I remember my heart being so full of joy and peace when I was afforded the opportunity to work with a group of students who had never before been to Bogus Basin or strapped on a pair of snowshoes.

Through our adventures in the Boise National Forest I witnessed the power of experiential education as students dug snow pits to take various measurements, snowshoes sticking up in the sky as their bodies dangled into their pits. Or as we “made our own snow” and acted out how snow crystals form. Or as we glissaded down an untouched, freshly blanketed hillside floating effortlessly over the deep snow.

I will never forget when I sat with a group of young refugee women in our igloo and each shared her first experience with snow. One young lady recounted how she had slipped on snow and ice while at school, how when she heard about her upcoming field trip up to Bogus Basin SnowSchool she was very nervous and did not want to join. We sat shoulder to shoulder in the protection of the igloo as she shared how glad she was to have come on this field trip and how much she was enjoying the snow.

Then, a little over two years ago, as the sun set on my time at Bogus Basin SnowSchool, I went to work at the Winter Wildlands Alliance office in downtown Boise as the Program Administrator. I was excited about this new opportunity: to not only still be connected to SnowSchool, but also to support conservation efforts, and the work to keep public lands accessible for all human powered winter recreation. I was truly looking forward to this next chapter in my professional life.

I was warmly welcomed by the rest of the staff and the board. Everyone at the organization was kind and well-meaning. And yet it wasn’t long before I started to feel that something was “off.” For lack of a better way to put it, I started to have something of an identity crisis. I found myself, a Japanese-American woman who doesn’t backcountry ski, working for what I — and seemingly everyone else as well — thought of as a backcountry ski organization. As a result, I found myself feeling not included or represented, like I didn’t belong. Certain interactions would strike me like a bolt of lightning, reminding me that I wasn’t part of this club. Images on the website mostly featured white male backcountry skiers. Conversations around membership were thick with language specific to backcountry skiing, insider lingo that only one familiar with the sport would understand. Over and over again it all called into question if I was good enough, or qualified enough, to be part of this organization.

Fast forward to my first ever Outdoor Retailer Show, a massive winter sports trade show held at the Convention Center in Denver, Colorado, attended by tens of thousands of seemingly hard-core people in the latest brightly-colored technical outerwear. This was where I truly began to question what I was doing—not only at the event, but with this organization. I was overwhelmed and already insecure in my new position; I felt like a total fraud. I weighed myself down with self-inflicted pressure to fit the part; to become a backcountry skier and to be able to share a similar passion with so many of the organization’s members and partners.

I tried. I tried hard to convince myself that I enjoyed my first backcountry skiing experience. It seemed like an important part of my job. The skins kept slipping off the rental skis. (I didn’t feel like I could afford my own equipment — there was so much specialty gear, I didn’t even know where to start!) Everyone was very understanding and supportive, but it was obvious I was holding everyone up. I fell, and essentially rolled the whole way down the ungroomed hillside. Then I had to climb back up what I’d just come down. The more I sought to feel included, to assimilate, the more I was losing my true self. I was overwhelmed with my lack of authenticity.

Sadly, I’m a master at assimilating. Growing up in a very white community in Boise, Idaho, I never acknowledged — or even denied — my Japanese background. My childhood goal was always to fit in, to just be “white.” And in general I succeeded, but at the heavy cost of losing touch with my roots. I remember being so embarrassed when friends would overhear my mother speaking fluent Japanese on the phone with my grandma.

As I got older, however, and started to understand more about the world and myself, I had something of an epiphany over my heritage. I found myself wanting to connect with this cast-off integral part of my identity; I was ready to embrace my whole self and be proud of who I am. But then this new role at Winter Wildlands Alliance rocked that new-found confidence. I found myself once again feeling those old emotions of embarrassment, that familiar desire to change my habits and language so as to erase my difference.

I didn’t realize how much weight I was bearing — how much baseline discomfort; how much sadness, stress and loneliness — until I acknowledged it, and then slowly began to let it go. I recognized that there was privilege in being able to work through this. There was privilege in working for an organization where I felt safe enough to share my story and express my feelings of exclusion and isolation. I started to think about what could be done — measures that could be taken — to create a more welcoming, inclusive, diverse, and safe space that a true diversity of people —like me and not like me — would want to be part of.

I was inspired by a film about Yesenia Castro called “I Am Here” that was featured in the Backcountry Film Festival. I was inspired by various conversations I had with others who were also embarking on their own journeys to make their workplaces and organizations more just, equitable, diverse and inclusive. My colleagues and I at Winter Wildlands Alliance started having candid conversations around the lack of diversity and representation in winter sports and in conservation.

Winter Wildlands Alliance is ultimately made up of a bunch of individuals. As we continue to have these conversations, and to identify real, tangible actions that can be taken to start weaving in justice, equity, diversity, and inclusion into the work we do, I have felt a positive shift in organizational thinking and decision making. I see it in my colleagues’ efforts of reach out to tribal communities on policy work, in their collaborations with equitable access groups to advocate for ALL non-motorized snowplay experiences (not just the raddest, steep-and-deep backcountry skiing experiences), in the ongoing efforts to diversify the imagery on our website and publications, and to broaden our ambassador team. And in the entire staff’s willingness and commitment to engage in bi-weekly DEI discussions with the role of facilitator rotating among the employees.

The most empowering experience I’ve had so far came from a recent chance meeting with a fellow SnowSchool educator at our inaugural SnowSchool Virtual Conference in November. While a virtual conference may not be the most personal way to meet new people, it did allow me to see the faces of many other SnowSchool educators. And to suddenly see on my screen another face that looked like mine, another Japanese American face — Kurt Ikeda’s (see p. 9) — shifted everything. I felt an immediate sense of kinship and relief that I hadn’t even realized I needed. It turns out there are others just like me: non-white, non-backcountry skiers, out there doing similar work in outdoor education and conservation. It was a chance interaction that I’m deeply grateful for, but I’m also hopeful that through intentional community building and outreach, connections like this won’t always be left up to chance.

I recognize that Winter Wildlands Alliance was founded by backcountry skiers, and I’m thankful for their hard work and passion. They helped set the foundation for what this organization has grown to be, and how it advocates for a wide variety of human-powered snowsports experiences for all types of people. As I look to the future and think about what could be, I remember how my story at Winter Wildlands Alliance started, and I’m hopeful that our sincere efforts to become a more diverse, equitable, and inclusive organization will empower others to feel welcome and included. It’s a slow journey, and a journey without end. But it’s necessary. And I am here.