Wildlife, Wilderness, and the Great Burn

The epicenter of a tragic wildfire in 1910, the Great Burn has been left alone for a century of regrowth. Today, it is a recommended wilderness area along the Montana-Idaho state line with an abundance of wildlife habitat. As the Forest Service rewrites the Nez Perce-Clearwater National Forest Plan, the Great Burn needs continued protection.

As the storm approached a piece of untouched ground, it announced itself with a roar and a light on the horizon and finished with a sea of flames, suffocating the woods. If there was a river in the way, the fire leapt over water. If there was a lake in the way, it rode its own wind to the other side and alighted on fresh timber. If there was a town in the way, it engulfed it without blinking, exploding a barrel of kerosene or a tank of oil, taking tents and timber, taking shellacked houses and plank sidewalks and cedar-shake churches, all ready for the burn.

—Excerpt from The Big Burn, by Timothy Egan. 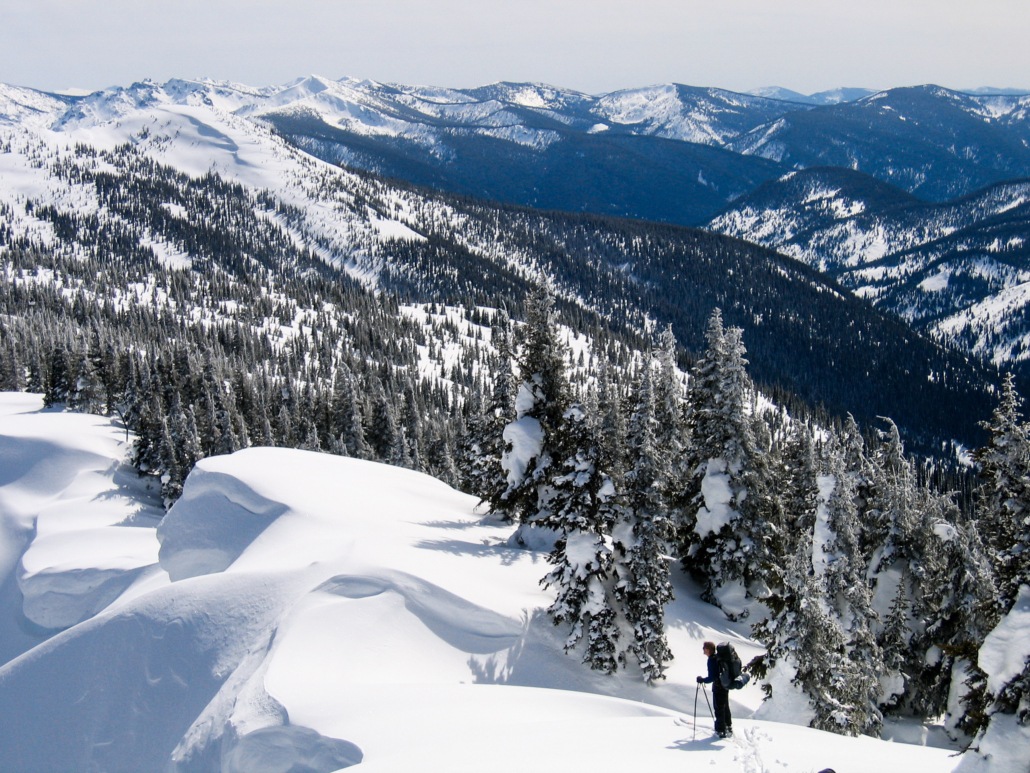 The wildfire that raged across Northern Idaho and Western Montana in late August 1910 burned three million acres in two days. Eighty-seven people died. Mountain slopes and towns, alike, were incinerated. An enormous tragedy of the time for the sheer scope of the fire and loss of life and property, today it’s a wonder to see how the Great Burn’s destruction was also its salvation.

In the aftermath of the Great Burn, Congress tasked the Forest Service with wildfire prevention and suppression strategies that lead us to present times. Meanwhile, in the Great Burn, the forest began its process of regrowth.

For more than a century, the Great Burn has largely been left alone to its natural rhythms and cycles. As a result, today it is a land of abundance. Its 275,000 acres are brimming with forests, alpine lakes, and remote mountains that provide habitat for wildlife. Especially for species like wolverines and mountain goats, who depend on rugged and remote habitat for survival, the Great Burn is an important refuge. It is also a key point of connection between wildlands in the north and those in central Idaho: From the Crown of the Continent, through the Selkirk and Cabinet-Yaak ecosystems, the Great Burn is a bridge to the Frank Church-River of No Return Wilderness, the Selway-Bitterroot Wilderness, and, eventually, the Greater Yellowstone Ecosystem. Because it connects such a large block of undisturbed habitat, the Great Burn is a likely route for grizzly bears to return to central Idaho.

Places like the Great Burn are incredibly rare in our modern world, even in some of the most mountainous regions of our country like Idaho and Montana. It has a long legacy of conservation: the Great Burn has been recommended for protection as a Wilderness area for more than 40 years. Much of it would be Wilderness today if President Reagan hadn’t pocket vetoed a Montana Wilderness bill in 1988.

Now, as part of a forest plan revision, the Forest Service is considering whether to allow snowmobiles in the Great Burn and to shrink the boundaries of the protected area to allow increased logging and road building. If that happens, there’s no going back.

Backcountry skiers typically access the edges of the Great Burn in late fall, from the middle of November to Christmas, before the access road on top of Hoodoo Pass gets buried and becomes impassible. “It’s an appealing early season place to go,” says Brian Story, a local backcountry skier who describes skiing 2,000-vertical-foot runs down hanging cirques. “You stay up high and there are these concentrated, beautiful, high-alpine cirques that extend all the way down the Great Burn.”

Right now, the Forest Service is in the middle of a 90-day public comment period for forest planning in the Nez Perce-Clearwater. We can thank the National Environmental Policy Act for giving us this window of opportunity to weigh in on the Forest Service’s impending decision. And this is, indeed, a big decision. Last updated in 1987, the new forest plan will be a guiding document and a blueprint for how the Nez Perce-Clearwater—and the Great Burn—is managed for generations.

The Great Burn is currently wild, quiet, and undisturbed in winter. Snowmobiles are prohibited inside the Great Burn and that policy needs to stay in place because when it comes to wildlife, the stakes are incredibly high.

Snowmobiles can obviously travel much farther distances than humans on foot do. Backcountry skiers can really only access the edges of the Great Burn and that’s only when the road is cleared in the late fall or spring. That kind of limited access is a good thing. Iconic species of the Great Burn like wolverines and mountain goats need time away from humans, especially in the winter. This time of rest is crucial to their survival. Mountain goats, especially. They are native to the Great Burn, but their population there is declining and wildlife biologists are concerned. When a snowmobile echoes up a canyon, or a human comes into view, goats run. This displacement happens in deep snow and often precarious places atop rocky cliffs and it not only breaks up groups, separating nannies from kids and causing injuries to animals, it also wastes precious energy that the goats must ration until spring if they are to survive.

“Preservation of wild spaces without human influence is ever more important as we continue to fragment habitat and expand our footprint as human beings,” says Greg Peters, president of the board for Montana Backcountry Alliance, one of the local grassroots groups that Winter Wildlands Alliance works closely with.

The Idaho side of the Great Burn is closed to snowmobiling because a fairly recent travel plan in the Clearwater respected its values as potential Wilderness. However, through the forest plan, the Forest Service could open the Great Burn to snowmobiling in a number of ways—and motorized groups are pushing the agency toward that direction. For example, the Forest Service could reverse its position and say that snowmobiles are allowed in recommended Wilderness areas. Or, they could shrink or eliminate the recommended wilderness designation currently protecting the Great Burn  to carve out key areas at the bequest of the snowmobile community—areas that are also extremely important mountain goat habitat. Finally, anything that’s not recommended for Wilderness in the Forest Plan will be opened to road building, logging, and increased motorized recreation—not just in winter, but in all seasons.

“Once that area loses its wilderness management status by allowing snowmobilers and motorized recreation, it’s game over,” says Peters. “If you get that motorized incursion, that will be really hard to pull back from. That’s the biggest reason to get involved.”

The Forest Service prefers comments to be written and sent to them directly, which is why we don’t have a letter-writing tool for you this time. To weigh in on the forest plan draft environmental impact statement, use their online comment portal. Here is a guide to help you write effective comments. And, to make it easier for you, we’ve outlined a few talking points for you to consider including in your letter: