Skiers, snowmobilers, conservationists and other winter recreation stakeholders come together to help protect and find ways to co-exist with the iconic mountain carnivore

Known for its ability to cover distance quicker than a Nordie with perfectly waxed skis, and to cruise up and over mountains faster than the gnarliest ski-mo racer, the wolverine is among the most iconic of winter wildlife species. Skiers, snowmobilers, and others who love spending time in snowy places feel a special affinity with and appreciation for wolverines. Like wolverines, we’re snow-dependent critters who are facing a serious threat because of climate change. Unlike wolverines, we can handle a crowd — even if we’d prefer not to. 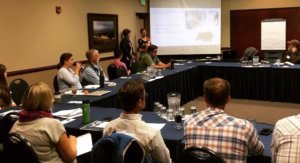 Winter recreation stakeholders and conservationists working together to find common ground and develop recommendations for the Forest Service.

Winter Wildlands Alliance has been working with the Idaho State Snowmobile Association and Round River Conservation Studies to reach out to the backcountry Snowsports community with information about wolverines, how our activities impact the species, and how we might mitigate that impact.

Unfortunately for all concerned, new research shows that backcountry winter recreation — snowmobiling and backcountry skiing alike — impacts wolverines. With help from skiers and snowmobilers using GPS units to track their own movement in the backcountry, scientists discovered that wolverines strongly avoid areas with lots of human activity, whether we’re snowmobiling, skiing, or just tromping through the woods on snowshoes.

Wolverines may use areas adjacent to popular winter recreation areas, and they may pass through areas with heavy recreation pressure, but they’re not sticking around in places where there are lots of people. In short, wolverines don’t den, rest, or eat in places that get a lot of backcountry ski or snowmobile use — even if those places are part of a larger wolverine home range. This is called “functional habitat loss,” and it poses a real concern for wolverine survival. 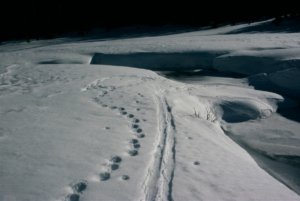 The conservation concern here is two-fold. First, wildlife biology 101 tells us that an animal’s home range is the minimum amount of space that an individual requires to live and reproduce. If backcountry skiing and snowmobiling are effectively eliminating portions of a wolverine’s home range, it’s likely we’re having a negative effect on that wolverine’s ability to make a living and reproduce. And since wolverines are pretty rare, impacts to even a few individuals could have population-level impacts.

Second, because of climate change, there are (and will continue to be) fewer and fewer places for all of us — skiers, snowmobilers, and wolverines — to find snow. Pair this loss of snow with a growing interest in backcountry snowsports and new tools and toys that help us travel deeper into the backcountry than ever before, and wolverines may have a tough time finding snowy places that aren’t overly impacted by humans.

The good news is that with some self-imposed restraint we — the backcountry snowsports community — can help reduce our impact on these tough but vulnerable animals, without greatly impacting our own opportunities for fun and exploration in winter.

We’re all familiar with the concept of suburban sprawl. Now think about your favorite backcountry area and how recreation use can sprawl across the landscape as people seek out the next untracked peak or meadow. By limiting that sprawl, we can limit the functional habitat loss that wolverines are experiencing.

As tempting as it is to explore deeper and further into the backcountry, by sticking within established and agreed-upon recreation areas when skiing and snowmobiling in wolverine habitat, you can help reduce your personal impact on the species. And, if we all limit our personal impact, together we can make a big difference in wolverine survival.

For more information, check out the following brochure that we recently produced in partnership with the Idaho State Snowmobile Association and Round River Conservation Studies.